Last fall, when CIA alumna Courtenay Finn accepted the position of chief curator at the Museum of Contemporary Art Cleveland, she returned to the city she has lived in the longest. 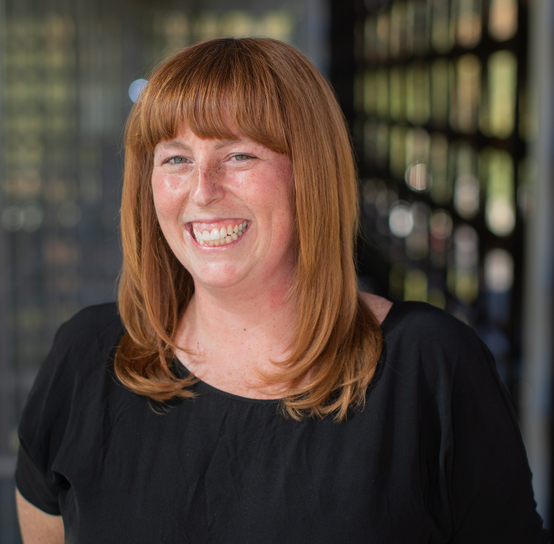 Finn clocked six years in Cleveland during and after her time as a CIA Fiber + Material Studies major. That constituted a record for Finn ’05, who was raised in a family that moved frequently and internationally.

Between the time she left and returned to Cleveland, Finn accomplished a lot. She earned her master’s degree in curatorial studies at the California College of the Arts. She served as curator at Art in General, a New York nonprofit that helps artists access space and resources for new projects. And, more recently, Finn was senior curator at the Aspen Art Museum in Colorado. (Yes, she learned to ski. No, she wasn’t heartbroken to leave Aspen for Cleveland.)

At moCa, she works closely with Jill Snyder, museum director, and Megan Reich, deputy director, to plan shows and programs. Her duties include directing the recently created Gund Foundation Curatorial Fellowship. Historian and writer LaTanya Autry, hired in March, is the inaugural fellow.

Finn—who is serving as juror of the 2019 CIA Alumni Exhibition—answered a few questions about her approach to curatorial work.

What does it mean to be chief curator at moCa Cleveland?
All of the art that you see in the building comes through the curatorial department—the artists we show, the scope of the exhibitions, and also a kind of holistic, collaborative approach between the art that's on view and the way that we think about education, engagement, and learning. So we are presenting art that we think is the most meaningful or extraordinary or exciting that's being made right now.

It’s a very collaborative approach with Megan, our deputy director, who oversees education and learning, and Jill, who has a vision for the institution as a whole. I'm trying to think about it holistically: How do you balance a program where there's a little bit of something for everybody, and where it changes, and it shows the full spectrum of what contemporary art can be?

In your previous roles, were you at places that, like moCa, didn't have permanent collections?
Yes. I just came from the Aspen Art Museum. They're also a Kunstalle—a non-collecting contemporary art museum whose exhibition program changes really rigorously. Kunstalle is the German word for a house of art. A lot of places all over Europe, and in particular Germany, have this house-of-art space. It’s not the big, encyclopedic museum, but a place where exhibitions happen and they show art that's being made at the time. MoCa kind of embraces that idea.

I'm not a classic art historian, and so I'm really interested in thinking about how you can create a scenario—an experience—with art that's happening right now. What does that feel like as opposed to necessarily thinking about its relationship specifically to history?

I've always worked in a place where I didn't have a collection. It offers a very great chance to collaborate with artists—to help them realize new bodies of work for the first time or experiment.

In college, you became attuned to organizing experiences rather than making objects. How did that happen?
Maybe halfway through CIA, my work became very much about how to tell stories in space. So I was making the objects, but really thinking a lot about how they were organized in space. The other thing that I noticed was that I was spending a lot more time in other people's studios, asking them about what they were making and thinking about their work more than I was about my own. Debra Carlson and Tina Cassara were running the fiber department, and they sort of pushed me to think about exhibition-making as a creative process.

Normally when you see art in a museum or gallery space, it's the finished presentation that's on the white wall. But in art school, you're around a lot of different people with different interests making things differently and you get to see it.

And so I was really fascinated with the different approaches that people take, in especially in fiber, which was so diverse in terms of what people are making. You had people who were doing more traditional things, like sewing and pattern making, making clothes, making conceptual art, performance, people making sculpture, dying and painting fabric. Everyone had their own sort of unique approach to the medium or the material, but also concepts behind the work.

I just really wanted to know more about why each person was interested in, what they were thinking and how all of those different perspectives are happening in the same place. We're all being exposed to the same reading in our classes, and we all live in Cleveland, and we are spending time with one another, but you still have these really individual practices. I thought that was very fascinating.

So does it reflect an interest in storytelling?
For sure. I'm a really avid reader of both fiction and nonfiction, and that is something that I think art does incredibly well—create a vehicle for storytelling, both from the perspective of the artist but also in relationship to other objects, where you start to make connections between things.

What’s fulfilling about working in exhibitions?
I was a weaver. I tell people that making an exhibition is basically the same. You have a set framework, which in the exhibition is usually the architecture, a timeline. It's like your loom space. And in weaving, your pattern or design has to be built from the structure. They are not separate. It’s sort of the same thing with an exhibition. If the conceptual part and the actual experience of looking at art and moving through space are not integrated, then it’s not successful.

What are you working on in terms of exhibitions at moCa Cleveland?
There's one more season that is still on the schedule that was conceived of and put into place before I got here. The Liu Wei show [September 13, 2019 to January 5, 2020] is a commitment that the museum had already made. It’s going to be like a little survey introduction to his practice, showing his works in a lot of different mediums, from video installation to sculpture to painting. We're partnering with the Cleveland Museum of Art on that show.

The first project that's conceived by me is a show [that’s where the beauty is] on view in Aspen. It's a big solo show of Margaret Kilgallen's work, and that’s coming in January. She was a Bay Area artist who sadly passed away quite young in 2001. She worked mostly in painting and drawing. She did a lot of public murals. She's really interested in typography—in printmaking, letterpress, folk art, Americana culture. She did a lot of paintings on found wood. It's all done by hand. She really believed in the mark of the hand. I actually learned about her in my printmaking class at CIA.

How do you expand the audience for contemporary art in Cleveland?
What I’m doing right now is trying to understand how people feel about moCa and the art scene here in general. I’d like to know what people are excited about, happy with, frustrated with, and trying to think about. So that's why it's kind of nice for me that the Margaret Kilgallen show will come here. It will be an interesting way to see how people respond to a show that I already worked on, but it gives me some time to listen and talk to people about how the programs here can impact them.