For Glass major Betty Rozakis, 63, drawing was an early interest--and something she pursued at almost every stage in life. But not long after starting at CIA, she realized her creative calling was to be a maker. 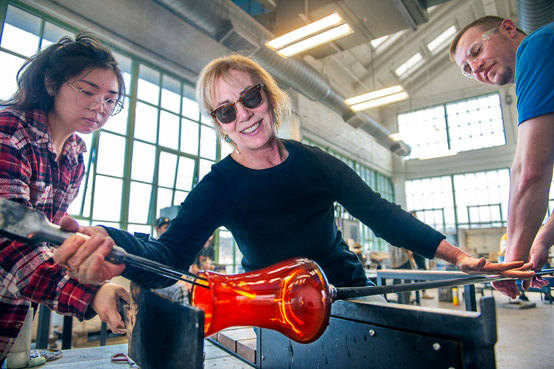 Betty Rozakis loves to draw but discovered at CIA that she also loves making. The Glass major is a member of the class of 2021. Photo by Rob Muller / CIA

Rozakis is the former chief financial officer of Northeastern Eye Center in North Olmsted, Ohio. Today, she owns Betty Rozakis Graphology, a handwriting analysis company, and writes a column for the Lakewood Observer. Rozakis also wrote Coffee with the Subconscious, a book about handwriting.

How did you end up at CIA?
While an undergrad at Baldwin Wallace, I wanted to take drawing classes, but I didn’t have a portfolio, which I needed to sign up. History became my fallback position, but the drawing wouldn’t go away. I took drawing classes at Duke University when my husband was studying medicine there. When we moved to New York City, friends steered me to The Art Students League of New York. After returning to Cleveland, Beck Center for the Arts in Lakewood served my artistic needs until I got bored. I started posting my drawings on social media, and a friend noticed and encouraged me to interview at CIA.

Why did you switch from drawing to glass?
I came to CIA to refine my drawing skills but (Jewelry + Metals professor) Kathy Buszkiewicz helped me understand that I was more of a maker and that I belonged in craft. I was deathly afraid of fire, but I was accepted into the Jewelry + Metals major. Then I was inspired by the work of Judith Schaechter, a stained-glass artist, during a CIA craft symposium. It was the light that emanated from the glass that spoke to my heart.

What has been your biggest challenge as a non-traditional student?
Getting through orientation. I was continually questioned, with people assuming I was either a parent or a professor. I was ready to quit if it hadn’t been for the nurturing guidance of (Dean of Student Affairs) Nancy Neville, who literally picked me up off the floor in the restroom.

How have family members and friends reacted to your decision to return to school?
They’ve encouraged me because I was always creative and they saw me happy at school, doing what I love to do.

What do you want to do with your art/design education?
Through the Creativity Works internship program at CIA, I’m creating a History Wall of Glass for the Beck Center, a glass mural of how the center evolved over its 90 years. My hope is to continue community and gallery work, integrating my glass, drawing, metals and graphology skills, along with my history background.

What’s one interesting thing people don’t know about you?
I’ve saved every handwritten note and card I’ve ever had, which led to my interest in graphology, and my earning an advanced diploma at The British Academy of Graphology. You can understand people based on their handwriting.

CIAâs Pre-College helped Karl realize art school was the right choice for him. If you know of a rising high school sophomore, junior or senior who might also benefit, they can learn more aboutâand apply forâthis summerâs program after reading Karlâs Q&A. https://t.co/Ww3AJWQnKK

CIA alum Jean Wells, profiled as @onmilwaukeeâs artist of the day, shares how COVID-19 has affected her practice. This 1990 grad is president of the Wisconsin Designer Craft Council and co-founder of @MKEEmptyBowls, which raises funds for food pantries. https://t.co/ENVnGBzePE

We love our media mesh for how it showcases CIA studentsâ talents and brightens @inthecircle and @UptownCle. Since social distancing means many canât see it these days, we updated our Facebook cover photo to serve as a virtual media mesh and are sharing it here on Twitter. Enjoy! https://t.co/0jMiqP7T0q