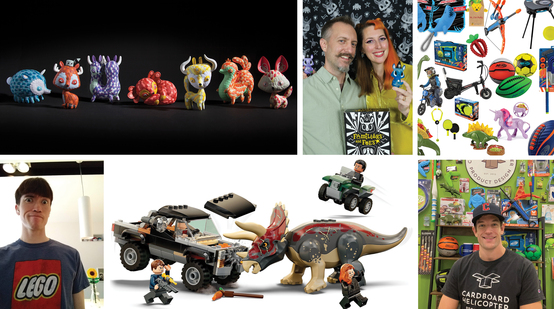 Talk to artists who work in toy design and you’ll find agreement on some job basics: open-mindedness, a willingness to take risks, and the ability to think like a child. In Tim Hayes’ phrase, a toy designer requires a “fun brain.” Atticus Tsai-McCarthy loves the stories toys can tell, and Jordan Perme and Christopher Lees like the ways toys enhance childhood and amuse adults. All established their grounding in the field as students at the Cleveland Institute of Art.

Perme ’09 earned a BFA in Fiber + Material Studies. Lees, her husband, spent two years at CIA after earning a Bachelor of Science degree in mechanical engineering from the University of Akron. They founded Horrible Adorables, their line of cute, unsettling creatures, in 2011. Perme also does freelance toy and textile work.

Each alum brings fresh perspective to an industry slowly emerging from the pandemic.

Inventiveness is key
All the paper route money Hayes made as a kid went for toys, and his favorite was the Teenage Mutant Ninja Turtles Pizza Thrower, a kind of tank that blasted out plastic pizzas.

As an adult, Hayes still plays, but now it’s with Oculus Rift, the virtual reality headset from Meta. He’s not sure he’d call it a toy, but it evokes a sense of creative play that Hayes uses for designing, sketching and gaming.

Cardboard Helicopter pushes the envelope with fresh riffs on the familiar, like his favorite invention, Ready Set Fetch. Playing with Ready Set Fetch is like throwing a dog a Frisbee, but less tiring.

Designed for the midline Boston toy company Franklin Sports, the variable-speed device spits out discs more than 85 feet for two hours. “Imagine a baseball pitching machine on its side, launching this thing in a backyard,” says Hayes. “I would say that’s one of the coolest things that came out that’s kind of just revolutionary.”

Hayes also gets a kick out of the dinosaur taco holder Cardboard Helicopter came up with. This functional plastic triceratops, which his company licenses, scrambles toys and kitchenware.

His business is ideas, Hayes suggests. He hopes to find time to design a cardboard helicopter—or, better yet, a “future ball.” These concepts are in the early stages. Already out and big hits: NERF Paddlepong (“soft” table tennis with no ball) and the NERF Spiral Grip, a toy football with an elegant, palpable texture.

Working for an icon
Tsai-McCarthy found his dream job when he joined LEGO as a designer in February 2020. Not only did he design sets of toys with a Jurassic Park theme, he’s enraptured by the lore of LEGO, which was launched in 1949. His education stood him in good stead, but becoming comfortable with toy design wasn’t easy.

When he entered CIA, Tsai-McCarthy thought he would become a comic book artist or game designer, but he pivoted toward Industrial Design. While he knew ID was challenging, he also felt it could help him pursue toy design, a field in which successful expressions involve storytelling.

CIA faculty who helped him develop include ID chair Dan Cuffaro ’91, Dennis Futo ’84, Doug Paige ’82, Pete McEachen ’94, Carla Blackman and Adrian Slattery. Cuffaro and Futo allowed him into the major, and along with Paige, “gave me experiences akin to my real-world encounters as a designer.” Blackman and Slattery helped ground him, and McEachen works in the field.

Tsai-McCarthy also credited ID’s tradition of working on designs for major toy companies such as Little Tikes, Hasbro and Mattel.

School could be bumpy, but the struggles proved productive. “I took a semester of car design while at CIA and got my butt kicked,” says Tsai-McCarthy. Despite that, that class helped him design the Ford Explorer for the LEGO Jurassic Park set as well as the truck from the Jurassic World Dominion triceratops set.

“Even though that class did a number on me, it did give me what I needed to interpret the ’93 Explorer’s shapes,” says Tsai-McCarthy.

“The best toys will have a unique story, come from intellectual property-assisted stories (such as Marvel and Star Wars), or give the user the ability to tell their own story,” says Tsai-McCarthy, who lives in Billund, Denmark, LEGO’s company town.

Toys are an education unto themselves, he says. “In the early years, toys are great for developing important gross, emotional and social skills. Then, as the child becomes more self-sufficient, toys become incredibly important for expression, where users can tell their own stories, form their own conclusions.”

A different breed
Perme and Lees host an unusual menagerie in their home in Cleveland’s Tremont neighborhood. Their separate studios are dedicated to Horrible Adorables, the fantasy creatures they’ve been creating for more than a decade.

As a child, Perme preferred playing with toy animals rather than dolls. Now, she’s happy to develop quirky toy animals that appeal to kids and to produce toys that attract adult collectors as well. For her, the creative process is the through-line, the satisfaction.

Perme often works on concepts that don’t progress, but she’s proud when they click. Securing a deal to produce a line for the designer toy producer Kidrobot felt like a global breakthrough.

Take Pufferhedge, a 12-legged toy that melds hedgehog, dinosaur and pufferfish. It seems friendly, but the glossy felt scales wrapped around its frame feel aggressive. And it sports a horn.

On a more adult, art-collector level, there’s Polka Smok-Damazy, a fiercely beautiful wall hanging based on Polish dragon legend. This mash-up’s wings are made of vintage fabric, but it bears contemporary polymer clay fangs. The stare from its glass eyes make it a scary household guardian.

“Many times, things I work on are developmental concepts that don’t always make it to the shelves, or the final product becomes so altered I don’t see my artwork in them anymore,” she says. “It’s OK, though, because I enjoy having a small part in the creation of something big and world-recognized. It’s also part of the reason why I have another creative outlet in designer toys, where Chris and I have total control over what we produce.”

Horrible Adorables is an outgrowth of the soft sculptures Perme was creating in Fiber + Material Studies at CIA. “I felt very free in my chosen major to pursue character-driven artwork that was a bit odd and nontraditional, and I had a great support system to do it,” she says. “Once Chris and I started working together and achieved success with that side of the business, it was a natural progression to translate the characters we were constructing from felt and textiles into actual toys.”

“Having a good understanding of mold-making, casting and other toy manufacturing processes are critical building blocks to good toy design. The next step is creating a concept that fits within those manufacturing constraints. All this has to be executed with current and past trends in mind while directing what emotion the design will evoke—usually a sense of fun or playfulness.”

“Play is absolutely pivotal to me and my artwork,” says Perme. “With the work Chris and I produce for Horrible Adorables, we strive to make our art as approachable and accessible as possible. We can best achieve that by creating objects that are playful. Once you scratch the surface, a deeper meaning often emerges from our artwork … but we have to draw people in first so they will look long enough to discover what it is.”