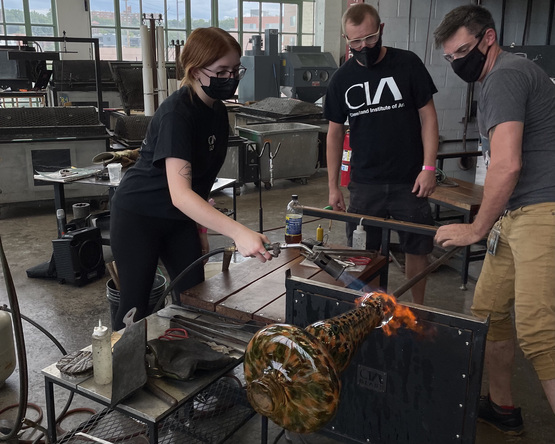 Glass chair Benjamin Johnson, center, says the transition to Craft + Design will be âvery natural, and focuses on craft as an area of study.â

Increased opportunities for interdisciplinary work. Greater freedom to explore personalized paths of creativity. More abundant interactions that strengthen connections between students, faculty and alumni. The students who pursue the Cleveland Institute of Art’s Craft + Design major will reap these benifits.

The new major was announced in August and will be implemented in the 2022–23 academic year. It will combine the three existing craft majors—Ceramics, Glass and Jewelry + Metals—to provide a contemporary approach to a comprehensive education that offers even more opportunities than before for cross-disciplinary innovation, peer support, knowledge sharing and creative experimentation.

The Craft + Design curriculum will have a newly refined focus on entrepreneurship, technology and design—with ever-evolving market demands in mind—while also allowing students the option to focus their studies by adding a concentration in Ceramics, Glass or Jewelry + Metals. CIA is also planning to introduce a minor for other students who would like to complement their major study with this future-facing craft curriculum.

Cross-disciplinary approaches are familiar to CIA alumni, particularly graduates of Craft majors. Ariella Har-Even ’19 earned her BFA in Jewelry + Metals, and while she primarily focused on that practice while at CIA, she credits the collaboration and experimentation that surrounded her with shaping her career path.

“Coming into the department, I thought I just wanted to focus on pure design and aesthetic and maybe make a line or something like that. I ended up making very conceptual work,” says Har-Even, a Cleveland jeweler and metalsmith who makes wearable art and who will be honored during NYC Jewelry Week in November as part of the event’s One for the Future platform. “I don’t think I would’ve made that transformation had I not been in an environment like this—with the professors that I had, who encouraged me to find that. A big part of it was experimentation.”

Ceramics chair Seth Nagelberg is enthusiastic about what students will gain from the formal incorporation of design into the curriculum. It can have an array of applications, all of which allow students to forge new paths for themselves.

“Design is part of what I do in my practice, and I think for a student, design can mean a whole bunch of different things. It can mean working with industry, having a studio practice that includes production, or having a practice where somebody’s work is based on the needs of other people,” Nagelberg says. “Design can be problem-solving. It can be for the community or something that makes somebody else’s life better. Having a design approach means that you’re empathetic and that you’re listening.”