Combining his love for glass, wood, and making

Mark Rubelowsky is about five years older than the average college senior, but he's been learning with and from fellow students who came to the Cleveland Institute of Art right after high school. 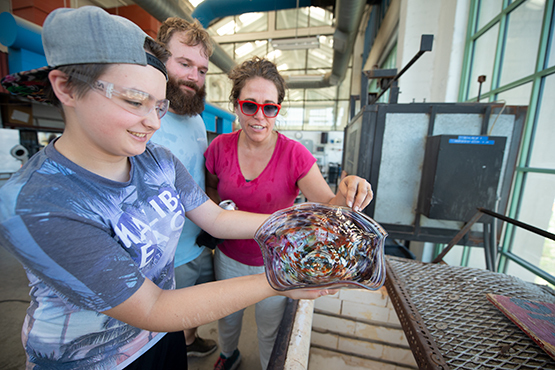 After earning a degree in architectural engineer at the University of Southern Mississippi, Rubelowsky planned to work with his uncle in a tree-trimming business and make furniture out of the wood.

But on a visit to Cleveland with his dad, who was about to take a job at the Veterans Administration, Rubelowsky got sidetracked by the idea of studying at CIA. “While he was getting fingerprinted, I came to CIA and thought it was really cool.”

Soon he was back in college, planning to supplement his architectural education with industrial design training and learn to make products and furniture. Then came another swerve. He realized he didn't want to spend four more years designing on a computer. “I wanted to get more hands on,” he says.

He landed in the Glass Department, where the chair assured him that his studies could combine all his interests: glass, wood, and furniture.

And combine is what Rubelowsky has done. His body of work features notable glass-and-wood mashups, including a horizontally cut wooden lamp with glass feet that feel like centipede legs. His “River Table,” juried into CIA’s Student Independent Exhibition, is an accent piece containing a well of flameworked glass rods that mimic moving water. More recently, he’s been experimenting with wonkily formed glass vases edged with living moss. He likes the idea that the moss requires a bit of care. “You build relationships with the things you live with and you really start to appreciate and love them,” he says.

Time at CIA has been well spent, he says. It was important to him to bring dedication to his learning. “If nothing else, you should be at least getting technically good at whatever you're doing,” he says.

But the real bonus was learning how to think more deeply about why he makes what he does. “The value comes from discovering yourself and your processes and the things that make your work unique and why you stand out,” he says. “If I hadn't done that, I'd be making probably the same work, but I wouldn't know why. I wouldn't have any strategies for making everything. It would all just be done randomly.”

His hope for the future is to end up making interesting, beautiful objects somewhere near Lake Tahoe, where he’ll have a dedicated studio in the woods. “My girlfriend's going to break up with me soon if I fill up any more of our house with equipment.”