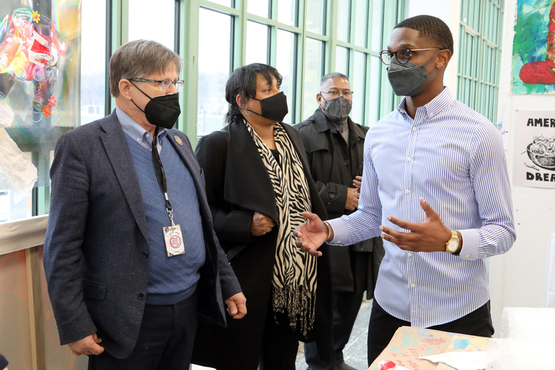 People from all walks at the Cleveland Institute of Art praise retiring president Grafton Nunes for the leadership he has demonstrated in his 12 years at the helm of the art and design school.

“He has possessed the unique ability to connect with our stakeholders, including our faculty, students and staff, and the ability to make a case for financial support among our friends and donors,” says Cynthia Prior Gascoigne, president of the CIA Board of Directors.

“His term has been marked by numerous successes and achievements that have put our school in sound financial condition, with dynamic programs, an enhanced endowment and a reimagined campus that includes a unified academic facility and the addition of two residence halls.”

“Grafton has been a transformative president at CIA,” says Fran Belkin, CIA Board vice chair. “His charismatic leadership has inspired our Board, raised the school’s profile in the community and left us in a solid financial position. His ability to articulate our exciting and important mission will continue to strengthen our reputation and ensure a bright future for CIA.”

Jason Tilk ’97, the first official president of the CIA Alumni Council that Nunes helped establish, says Nunes “was always willing to give us time, and to listen to what we wanted to get out of the group. He truly listened to what we were formulating, and he would report to the group information that was mission-critical for the Institute.”

One of Nunes’ biggest fans is John Ewing, director of the Cinematheque. “Grafton proved the best friend to the Cinematheque among the five CIA presidents I have worked under during my 36 years here,” Ewing says. “Because of his background as a film scholar, film producer and film buff, we have a beautiful and versatile new state-of-the-art movie theater that Grafton likes to call his ‘chapel to cinema.’ It will be his legacy to Cinematheque-goers for years to come.”

Mark Reigleman ’06 lauds Nunes for his ability to unify sometimes fractious constituencies. “What I found most unique about Grafton as president was his accessibility,” Reigleman says. “There always seemed to be a barricade between president and student, and Grafton had an incredible way of making those perceived barriers disappear. His approach to this position felt collaborative and he had a genuine interest in what the students were experiencing. Additionally, he was always curious and excited about art.”

“We have had a leader in Grafton who has guided us along a lot of rocky shores. He came in at a time when the school and higher education in general were being transformed. Society itself is in the process of remaking its ‘norms.’ Grafton, as a leader, has protected the space that was needed for CIA to enter into that transformation.”

“Grafton navigated CIA through our move to a unified campus and a pandemic,” says Dan Cuffaro ’91, Anne Fluckey Lindseth Professor of Industrial Design. “These were tremendous challenges, and the fact that we made it through is a testament to Grafton’s commitment to the College, his organizational skills and ability to rally the community."

Citing his “decisive and collegial leadership,” CIA board member Ruth Eppig fondly recalls hosting Nunes when he was still a presidential prospect.

“My husband and I hosted him at our home for dinner along with the other members of our search committee and spouses in order to emphasize to him how much we were impressed with him and wanted to attract him to CIA,” she says. “We have never been disappointed in our choice since he accepted our offer. His experience, empathy, energy and wise leadership style have defined his tenure.”

“During his tenure, CIA has become one of the most important anchor institutions in our region because of his understanding that the success of CIA and this city are inextricably linked,” Lillian Kuri, Cleveland Foundation executive vice president and chief operating officer, says of Nunes. “He has brought to bear the institution and himself on the incredible progress made in this region over the past 15 years.”