CIA students work behind the scenes on feature film 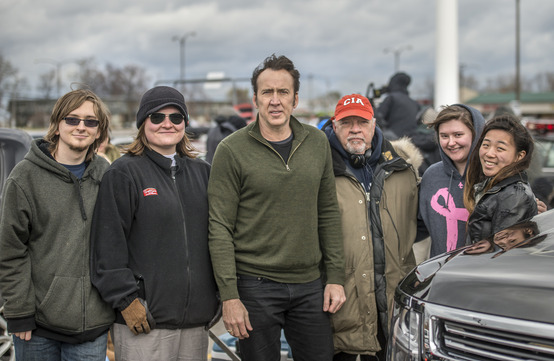 Five CIA Animation students will see their ideas play out in a major motion picture when director Paul Schrader’s latest film, “Dog Eat Dog,” is released in 2016. The students spent the first half of fall semester creating storyboards for the film, which stars Nicholas Cage and Willem Dafoe and is being shot in Greater Cleveland.

In mid-November, four of the five students visited the movie set in Sheffield Lake, Ohio. When she first arrived on set, junior Miranda Pavelle was delighted, saying “They’re filming my scene!”

Pavelle had teamed up with fellow junior Steven Rawley to work on one scene; junior Dylan Kamalay and senior Jessie Madden worked on another scene; and junior Lisa Tan worked on yet another scene. While the details of their scenes are secret, the basic plot of this gritty thriller involves three ex-cons who are hired for a kidnapping that goes awry.

The link between Hollywood and CIA was President Grafton Nunes, who met Schrader at Columbia University in 1979. Nunes worked for Schrader as a research assistant and stayed in touch with the director over the years. When Schrader came to Cleveland to look at locations for the film, “he asked me if we had students who could help with pre-visualizations, or story boards. I put him in touch with (Animation Department Chair) Anthony Scalmato who recommended five of his students.

“I couldn’t be more thrilled with the result,” Nunes added. “It was a great learning experience for our students and yet another way for CIA talent to add value to a Cleveland cultural and commercial experience.”

Students began meeting with Schrader early this fall semester. “First we got the script and then we set up a shot list with Paul (Schrader),” explained Tan.

“He would tell us what he was expecting for a scene and we would take his ideas and further develop them,” Kamalay added. “This way, rather than them having to figure out how each shot would look, we figured it out for them.”

The students used their visual communication skills – and the latest animation software – to block out their respective scenes. “I definitely think we incorporated a lot of elements we use in animation,” said Tan.

Kamalay loved “Going on set and seeing the work translated into an actual scene being shot… I’m excited to see the final product.”

Students will particularly love the ending, when they see their names in the credits.