CIA student highlighted as an emerging artist at SculptureX 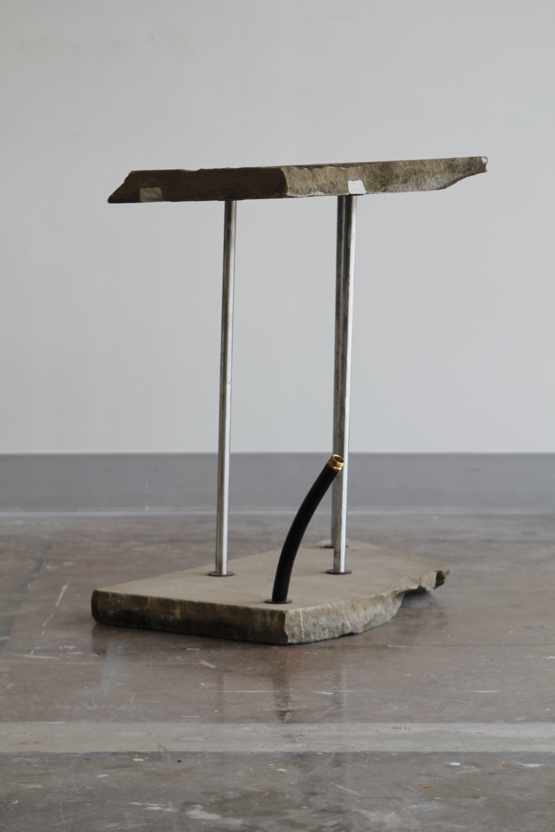 The free virtual symposium took place September 16–19, 2020, and Roth will participate in “8 Emerging Artists,” a panel discussion from 3 to 4:15pm Friday, September 18.

Ross is no stranger to SculptureX, a teaching and networking platform meant to foster artistic and educational collaboration among institutions in the industrial Midwest. He participated in last year’s symposium, too. We recently caught up with him to discuss his involvement in this year’s event as well as his artwork in general.

For those unfamiliar with your work, please describe your artistic practice.
My practice focuses mainly on understanding and reincorporating the consequential ephemera related to industrial processes, global trade, and consumption, with the aim of creating a critical space, wherein these processes and their consequences become subjects for further consideration.

Typically, my work meets at the convergence of the agrarian and the new. I tend to work with walnut, cement and installed media, with a keen focus on the physical relationships happening between materials and sections. Recently, I have undertaken some motorized projects, as well, which are in progress as of now.

In what ways will you be involved in SculptureX?
For SculptureX this year, I was asked to participate in an emerging artists panel to share my thoughts and processes with seven other regional artists. I am also co-directing the social media for the symposium alongside fellow SculptureX alum Ryley Brown. Ryley attends the Ontario College of Art and Design in Toronto. We've been working on a collaborative sculpture, which will be presented virtually Thursday, September 17 in the Ann and Norman Roulet Student + Alumni Gallery.

How did you become involved in the symposium? And in what ways did being a CIA student perhaps contribute to your involvement?
I became involved with SculptureX when my work was included in last year's symposium, which took place in Toledo and was hosted by Bowling Green State University. The call for art was brought to my attention by Dan Roth from CIA’s Fabrication Studios. Spending hours in the shop has definitely refined my sculptural tendencies.

What are you most looking forward to or most excited about with SculptureX? What do you perhaps hope to gain from the experience?
I'm very excited that this symposium has adapted to the pandemic. The opportunity to leave the echo chamber of isolation in terms of technical development for me is instrumental in creating work. The fact that the symposium is taking place, though remotely, has assured me that the world hasn't ended, so to speak.

What other professional experiences do you have under your belt?
Before coming to CIA, I worked as a machine operator in a steel processing plant to gain some financial security. What I learned there informs my work greatly. In 2015, I took part in a residency at Mint in Columbus, Ohio. I collaborated with two artists for a performance titled “Death Knell” at the Transformer Station in 2017 in Cleveland. As the quarantine went into effect, I had to cancel my first solo exhibition at Pop Life in Cleveland’s Waterloo Arts District.

How has CIA helped you develop your artistic practice?
I think that my professors are amazing in Sculpture + Expanded Media. They're always pushing me to refine whatever direction I'm going in while staying open to change. I feel that the possibility of an uninhibited space for sculptural development exists in SEM. The College’s Fabrication Studios are absolutely state of the art as well.

Why did you choose to study at CIA?
I chose CIA because the language of my practice is somewhat regional. There's no place like home and everything. This is the only school I actually considered applying to right out of high school, though I ended up working for several years to make this a possibility. I feel comfortable in using the materials native to Ohio while responding to more ubiquitous ideas.

To learn more about SculptureX, including how to register for Art & Agency, visit sculpturex.org.