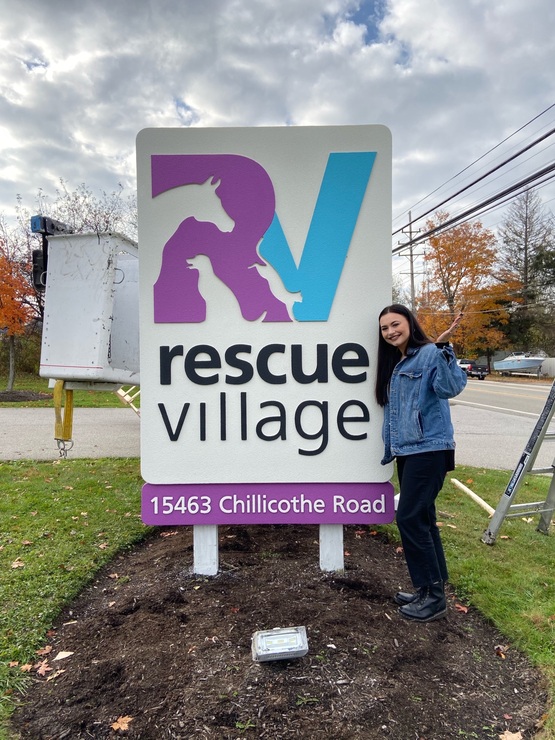 Junior Graphic Design major Cassie Harb has routinely worked with clients as part of her Cleveland Institute of Art course work, but a recent project involving Rescue Village stands out.

It isn’t difficult to understand why: Her design was selected by the humane society to be the centerpiece of its newly launched re-branding campaign. Harb’s logo—an “RV” monogram that incorporates silhouettes of a cat, dog and horse into the letters—is splashed across Rescue Village’s website, stationery and merchandise.

It also stands out in a literal sense. Harb’s design figures prominently on Rescue Village’s new sign along Chillicothe Road in Russell Township, Ohio. She attended the installation and unveiling ceremony.

“It was a big moment, and it’s a day I won’t forget because it was the peak of my college experience so far,” she says. “I’ve never had anything of mine be in public for everyone to see. I think that’s really cool. You can drive past and my design is right there.”

Harb created the mark for her Design for Communication II class during the spring 2019 semester, when she was a sophomore. Her instructor was Debi Belt, who points out Harb’s hard work has resulted in a nice addition to her portfolio.

“Projects are one thing to have in your portfolio, but if you can say that this is really used, and it can be used for 20 years ... that’s huge,” Belt says. “You don’t get that kind of opportunity, especially with branding. Even when you get out of school, you don’t (immediately) get that opportunity because you’re at a lower level.”

Belt serves on Rescue Village’s marketing committee, and when the humane society decided it wanted to partner with local schools on its rebranding, she suggested CIA. She then conferred with Graphic Design chair Greg Luvison to work it into the class’s curriculum.

As a result, Harb and her classmates were able to interact with a real-world client to ask questions, work through revisions, defend their artistic choices and present their work—all of which Belt thinks were valuable lessons.

“It’s different when I give them an assignment—they’re presenting to me, they know me and I’ve already talked to them about it in class. So, we kind of know where we’re going,” she says. “This was—even to me—a surprise as to what they were going to like.”

Hope Brustein is executive director of Rescue Village. She oversees a campus that includes a full-service veterinary clinic, state-of-the-art shelter, and an outdoor barn and trails to exercise the animals in Rescue Village’s care. That’s a unique combination of services for a humane society, and Brustein says Harb’s distinctive design conveys that distinction to Rescue Village’s audience of “hundreds of thousands.”

“We did a survey of logos of humane societies all over the country and nobody had a logo like this—and in animal welfare, there are several themes that get repeated,” she says.

Harb’s design replaces a logo that had been used since 2001 and was designed by Jenny Campbell, the nationally syndicated cartoonist behind Flo & Friends. Rescue Village sought to update its brand with its new logo, and Brustein found working with CIA to be “incredibly inspiring.”

“We’re all about community, but we’re also all about professionalism, so what better place to come than our prestigious Cleveland Institute of Art?” she says.

“We thought the process with CIA was so good. We knew we didn’t have to choose a design, but if we did, it was because it really captured who we are and what kind of look we wanted to carry us into 2020 and beyond,” Brustein adds. “We hope we know Cassie for a long time.”