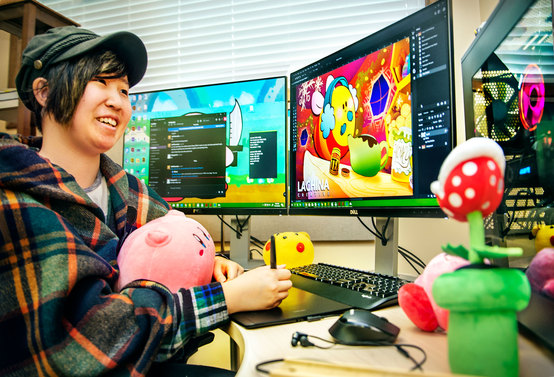 Lachina Creative animator Cas Yee â19 was the lead animator for CIAâs 2019 holiday greeting. To view the video or see another photo, scroll down. Photo by Rob Muller / CIA

At the heart of many holiday celebrations is family. It seems fitting, then, that this year’s Cleveland Institute of Art holiday greeting was brought to life by a firm that several CIA artists and creators over the years have called their professional home: Lachina Creative.

The greeting, a festive 30-second animation that depicts a honey bee preparing for the season, was created by CIA graduate Cas Yee, who earned a BFA in Animation in 2019. Lachina colleagues—and fellow Animation alumni—Taelor Benoit ’19, Sara Mapes ’14, Hannah Obremski ’19 and Marisa Pekol ’17 joined Yee on the project.

“It felt very exciting, and also really cool when I saw people’s reactions to my idea,” Yee says of their holiday honey bee concept. “Everyone collectively said ‘aww.’ It was very nice to hear people liked my ideas.”

Jeff Simonetta, who’s both a faculty member in CIA’s Animation Department and the creative director at Lachina Creative, said the animation deftly showcases the potential of all involved.

“We wanted to make a piece to show this type of quality can be done in Cleveland,” he says of the Beachwood, Ohio-based creative-services company. “I think it’s a good piece to show what is coming out of CIA and the Cleveland area as a whole, as well as Lachina.”

The connection between CIA and Lachina Creative runs deep. President Jeff Lachina hired his first CIA alum, Aaron Kantor, in 2006, the same year he graduated. And in the years since, 16 CIA graduates—12 full-time employees, three interns and one part-time creative director—have worked at Lachina. Currently on staff are Benoit, Mapes, Pekol, Yee and Margaret Li, who earned her BFA in Game Design in 2016.

The recent influx of CIA grads in part reflects a shift in Lachina Creative’s business, which largely revolves around developing and creating educational products. When the company was founded 30 years ago, that primarily involved textbooks and contracting with top publishers like McGraw Hill Education, Pearson and Columbia University Press. Over the last 15 years, Lachina says, visual narratives have played a larger and more important role in education.

“As that became apparent, we invested more in our visual artists, our artistic staff, to create more interesting and high-definition illustrations,” he says. “The natural progression for the visual narrative is animation—bringing things to life rather than having a static image on a page—and that held great interest for us.”

Lachina recognized that CIA’s Animation Department was producing skilled graduates who through the work they were exposed to at school had already developed a sense of working in a professional setting.

“That’s the thing I find most appealing—the education they get in the professional-development sense,” he says. “I think that comes through the program they go through at CIA, (in addition to) the sheer talent they have. That’s the combination that’s meaningful to us. We want to hire talented people who can hit the ground running, so to speak, who understand what it takes to complete an assignment.”

Simonetta has seen that process firsthand at CIA.

“Being a teacher, one of the things we’re focusing on in the Animation Department is having the creativity but also the work ethic,” he says. “To do animation is very labor-intensive, so you have to be efficient at it, and that’s what we train them to do.”

Yee credits CIA’s program with helping them transition from college to career.

“One of the main things they helped prepare me for was being able to not be afraid to jump into new things—new programs, new techniques—and to be self-driven to learn specific skill sets and to be able to execute a really cool project. I did that, and experimented a lot, at CIA,” Yee says. “All these new little things I learned along the way throughout my years helped me bring it together and be able to complete projects at Lachina—and my personal projects, too.”

Yee noted a growing animation department and the creative freedom they’d enjoy as reasons they selected Lachina Creative for their first job out of college. That there would be a few familiar CIA faces didn’t hurt, either. All five alumni currently on staff share an office workspace, an environment Yee likens to studying at CIA.

“I was with my Animation friends, and we were always in the old 319 room, just huddled together intensely working on our BFAs while also having a nice conversation, shouting, singing—a lot of fun stuff,” Yee says. “It felt like home, and when I realized that’s how Lachina was ... it was a lot easier to be comfortable (in their new work environment). 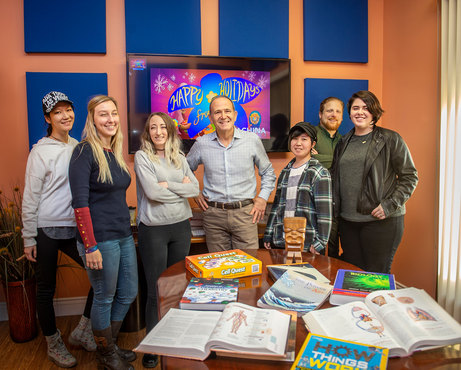