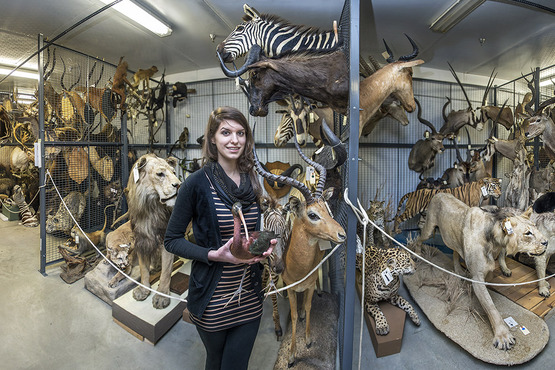 When Maria Burke came to the Cleveland Institute of Art as a freshman from Columbus, Ohio, nobody expected her to stay in Northeast Ohio. In one fell swoop (pun intended) she came to school at CIA, visited the Cleveland Museum of Natural History for a class, fell in love with it and decided to pursue a career there.

“I never had another internship, only here,” Burke said. “This place sort of stuck.” She has seen nearly every aspect of the museum’s structure, from volunteering to being a full-time employee.

“I started in the gift shop, just working as a sales associate,” Burke said. She began designing t-shirts for the gift shop, and at the same time volunteered in the Ornithology Department.

Later she began volunteering in the Taxidermy Department preparing specimens. “I always had an interest in taxidermy and started doing it on my own,” she said. “The taxidermist here caught wind of what I was doing and asked if I wanted to start working with him. That turned into an internship.”

For her Junior and Senior year, Burke managed to keep herself busy. “I would go to class all day, and just come here and stay late,” she said of CMNH. “The museum’s open late on Wednesday nights, and I would come for that. I was doing full-time back at CIA, then 20 hours a week here, hopping between departments. I basically lived between the two buildings.”

Burke attributes her experience interning and volunteering to the job offer she would receive during her senior year. “I did as much as I could at CMNH, got a taste of it all, so that when a job opened up people were familiar with who I was,” she said.

During her Senior year, Burke was busily planning her BFA, which would include a taxidermied remote-controlled skunk on a skateboard. During the process, she worked closely with that same taxidermist who had helped her get an internship, Larry Isard. “He was my mentor for my whole BFA,” she said.

In the middle of Burke’s BFA preparation process, Isard passed away, just two months before her graduation in 2009. Under the tragic circumstances, Burke was offered her mentor's job out of graduation, “being a preparatory for the Ornithology Department half the time, and the other half doing taxidermy for exhibits.”

Working as a taxidermist is only a part of her job, but Burke enjoys doing it and even does it on the side. “I like animals so much I think the idea of being able to make them live eternally is why I like it so much,” she said. As a hobby, she taxidermies people’s pets including rats and birds.

Having graduated from CIA, Burke wanted to create an exhibit to show visitors the wide range of work Biomedical Art students do. “They aren’t just doing work here,” she said, “they’re doing work at the Botanical Gardens and University Hospital… everything.”

In partnership with the Curator of Vertebrate & Invertebrate Zoology, the two of them curated this, picked out the best pieces. Art & Science: Biomedical Illustration in University Circle.

Fellow CIA grad Joel Alpern ’97 a printmaking major, is director of exhibits and has known Burke from the start. “She definitely worked her way in,” he said. “She’s a woman of many talents and she obviously has terrific artistic skills.”

Alpern noted Burke’s success at CMNH, as she was also awarded the prestigious Outstanding Staff Achievement Award, which is given to one staff member each year. Burke was chosen by her peers, and selected by a committee of peers and the board of trustees in 2014.

And as for her life outside of the museum? Burke makes an hour commute each direction from her home in Ashtabula where she runs a farm, owning “two roosters, 15 chickens, rabbits, dogs and a baby goat.”

She finds comfort in her career working with people who hold similar interests. “I think the best part is the people you work with. They ask me how my chickens are doing. They’re conservation-minded, science-oriented sort of friendly people,” Burke said.

Burke attributes her problem solving skills to attending CIA, and “knowing how to work under pressure and with a deadline. You need to know how to use your resources.

With so much experience in the field, Burke had a few things to say, not just for Biomedical Art students, but for all students at CIA.

“Just volunteer. I know a lot of kids want those paid internships, but an unpaid internship is just as good,” Burke said. “It doesn’t matter what you’re volunteering doing. I started folding t-shirts.”

You can see Maria Burke’s exhibit, Art and Science: Biomedical Art in University Circle, on the bottom floor of the Cleveland Museum of Natural History, open now through Fall, 2015.

Alyssa Brown is a marketing intern.