Two large drawings designed decades ago by conceptual artist Sol LeWitt have come to life inside a new health-education building at Cleveland Clinic, thanks in part to four alums of the Cleveland Institute of Art. 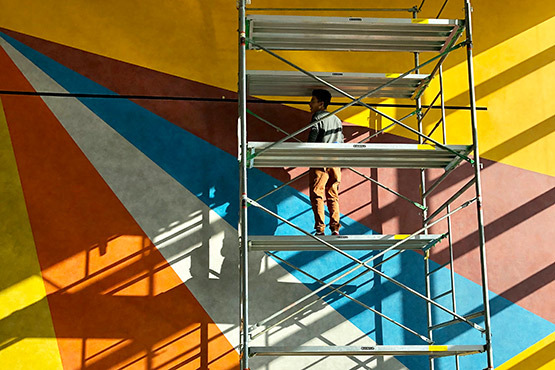 Sol LeWitt’s 606E (1989) and 436A (1993) now occupy massive walls in two classrooms inside the Samson Pavilion at the Health Education Campus, a joint space for medically related learning. For about a month, alums Davon Brantley, Susan Danko, Joey Goergen and Michael Lombardy worked alongside Cleveland artist Michael Sobeck and two artists sent by the LeWitt Foundation.

“It’s been a really special opportunity,” said Danko, an award-winning painter and 1998 CIA graduate. “It’s part of history. His work goes back to the beginning of conceptual art.”

The LeWitt Foundation and the Cleveland Clinic established a loan agreement that allows the drawings to be created and to stay in place for 25 years. LeWitt (1928-2007) created more than 1,270 wall drawings over the last 30 years of his life. Although he executed some himself, he believed the idea was the art, and he intended them to be completed by others.

The drawings consist of crisply edged geometric color fields, each developed through repeated washes of paint applied with rags. Working off hand-written instructions that describe composition, color mixes, and application techniques, the installers climbed scaffolds to mask off great swaths of wall and swish on layer after layer in the unmasked areas. It took 17 layers to develop the rich, mottled yellow background in the piece called "Wall Drawing #436A: Asymmetrical pyramid with color ink washes superimposed."

Although the works are inside classrooms, “we wanted to maximize the viewing,” says Bellamy Printz, a curator in the Cleveland Clinic Art Program. Glass walls offer views from the street and from the building’s interior.

“The biggest challenge has probably been the process of painting,” says Brantley, a 2018 CIA graduate who majored in drawing. “You have to make sure you’re using the correct way of wiping it, because you don’t want a pattern.”

In his studio practice, Brantley paints portraits with traditional brush strokes. “With this, you have to not have the artist’s hand in it,” he says.

Goergen, who graduated in 2018 with a double major in drawing and printmaking, says LeWitt’s wall painting concepts were “a thing we learned about in school, but it’s cool to see one actually built, and to learn the process behind it all.”

Last year, Goergen worked on the installation of a mural on a former bank building in Cleveland’s Collinwood neighborhood. The LeWitt experience is much more painstaking and methodical, with an emphasis on precisely following directions. And it has resonance for his own work.

“It’s made me think about approaching larger scale work, and it has encouraged a lot of patience,” Goergen says. “I generally whip through projects or drawings, but this is a monthlong process to finish one thing. Granted, it’s giant, but we have a team working on it.”

“I just finished an album cover for a band and I was painting the background for it while I was working on [the LeWitt],” Goergen adds. “I was thinking, I could just do this in one coat of paint, but I’m going to just try to do it in four or five. It’s way more opaque and lush, and there are no brush strokes at all. This is a big improvement.”

Lombardy, a 2015 grad with a printmaking degree, says he has been part of a number of large-scale projects, but that this one stands out because of the methods the team used. “We built the image on the wall the old way, which used a hand-drawn grid and other methods to check levels and measurements. With the other jobs I’ve been on, we used lasers and other modern tech to make it. It’s great to add these assets to my skill set, and I am certainly honored to have been asked by Cleveland Clinic to join on the project.” 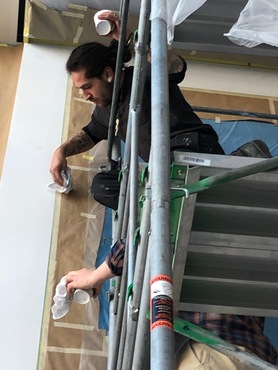 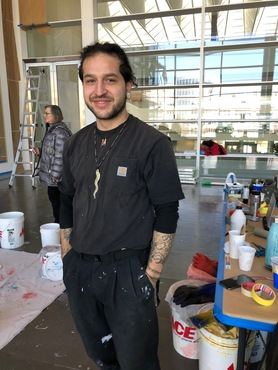 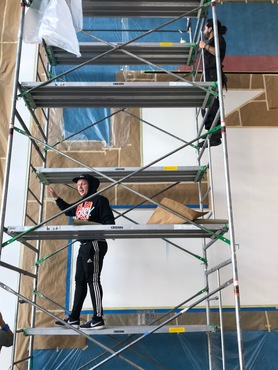 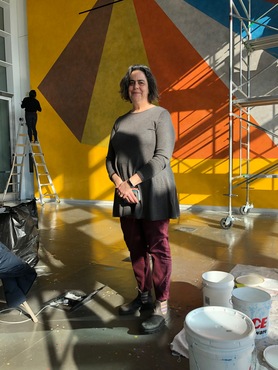 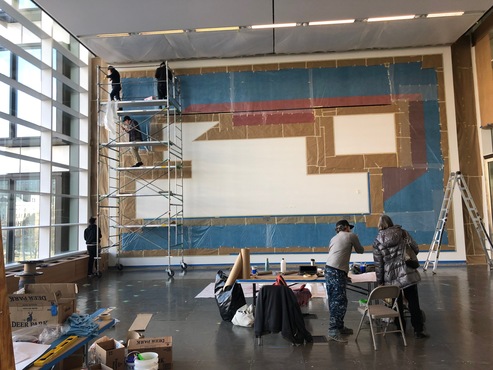