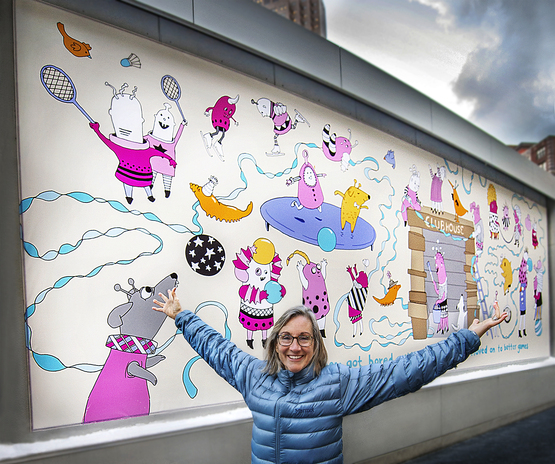 The LANDFORM Art Wall is arguably the most visible space for art in all of Northeast Ohio. Found on Public Square's southwest corner and facing Terminal Tower's main entrance in downtown Cleveland, it can be seen by thousands of pedestrians, cyclists, transit-takers and motorists as they pass through every day.

It’s prime real estate for the artists whose work rotates through the space, and from now through the end of January 2020, a Cleveland Institute of Art alum is featured there.

“It’s beyond words,” she says. “I can’t express how excited I am at the idea of people walking by this image with these weird creatures and having whatever reactions they have to it.”

LAND studio curates the 32-by-10-foot space. Project manager Erin Guido reached out to Sandstrom in May after discovering her work on social media. At the time, Sandstrom was promoting Such Agreeable Friends, a show in Heights Arts’ spotlight gallery that explored the relationships between animals and humans.

“She said, ‘Your art makes me happy, and I think it would make other people happy, too,’” says Sandstrom of her and Guido’s conversation. “Artists are used to peddling their art and trying to get it in front of people, and when people bump into it on their own and have a reaction to it out of the blue, it’s an extra layer of deliciousness because you didn’t see it coming.”

Guido says Sandstrom’s style is identifiable and represented a look LAND hadn’t yet featured on the art wall. She also noted that Sandstrom’s work hadn’t yet widely been shown—a factor the organization considers as it seeks to raise the profile of emerging local artists through the art wall.

As for "Play Better" itself, Guido considers it “joyful.”

“It’s a quirky image that’s fun to look at, but when you look at her artist statement, there’s more to it,” she says. “I like how it can be taken at face value as a fun image and how it can make you think a little.”

The cordial critters in "Play Better" jump rope, skate around, toss balls back and forth, and jump on a trampoline—all while smiling and wearing brightly colored clothing. A blue streamer winds around a clubhouse—and throughout the entire piece—evoking celebration. Sandstrom’s love of animals and drawing monsters both shine through.

“Animals and monsters are equally unknowable and fanciful. They don’t really belong in the same space, but I decided I was making up the rules,” she says. “Certainly, animals give me a tremendous amount of joy, and honestly, I just couldn’t not put them in.”

The timing of her mural being on view—through the holiday season—informed Sandstrom’s theme choice. She wanted something cheerful but not explicitly about the holidays, and she envisioned children and parents passing by, perhaps during the annual Winterfest celebration or while heading to Public Square’s ice skating rink.

“I wanted kids to be able to walk by it and be captured by the characters,” she says, adding she had adults in mind, too. “At least speaking for myself, I’m always happy to see something whimsical and delightful in unexpected places.”

At the bottom of the piece is written “One day, they got bored with keep away and moved on to better games.” Therein lies what Sandstrom says is a serious societal message about people getting along with one another—or not. She singles out the game keep away—a game in which a group of children keep a ball away from a single child—for its overtly exclusionary premise.

“We have these mean games we learn as kids and we, I think, still have those in adulthood,” she says. “I think we’ve been playing a lot of mean keep away as adults lately, and I wanted to show the opposite of that.”

CIA helped bring Play Better together. Sandstrom, who is the college’s director of communications, turned to Digital Output Center coordinator Josh Werling for advice on how to produce something the size of a mural. She also credits the education she received with helping her work through the daunting challenge of filling “the ultimate blank canvas.”

Sandstrom is the 10th artist—and second CIA graduate—to be featured on the LANDFORM Art Wall. The other CIA artist was Brian Jasinski, a 1999 graduate in Graphic Design, who in 2017 was the first artist to have a mural there. The art wall was created as part of the 2016 renovation of Public Square.

Congrats to CIA alums Jon LaGuardia and AJ Almy for winning a regional Emmy! As part of the @fusioncle team, their efforts on @DowntownCLE's "We Are In This" earned the @NATAS_LGL Emmy Award for Public Service Announcement! Watch the award-winning video: https://t.co/4vuQeSpyrJ

Did you see the news? CIA President + CEO Grafton Nunes announced he'll retire in 2022. Read more about his decision via @steven_litt's coverage for @clevelanddotcom. #clevelandinstituteofart https://t.co/3IiIMIF7px