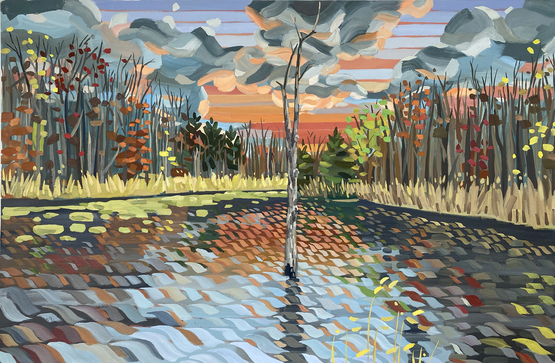 âFallâ by Timothy Callaghan â99, one of four paintings of his at the Bainbridge branch of the Geauga County Public Library. Courtesy of the artist.

That’s why artwork by Timothy Callaghan ’99 is so appreciated at the Bainbridge branch of the Geauga County Public Library. His four oil paintings, each depicting one of the four seasons, hang high on a prominent wall.

“I love what these pieces do in this space,” Gabrielle Kusner, library assistant at the Bainbridge library, says of Callaghan’s art. “Each piece is leading you somewhere. There is movement in each one.

“That’s kind of the concept of libraries, too,” Kusner says. “It’s a space where you come to learn. It leads you somewhere. You discover new things here.”

Callaghan isn’t the only CIA graduate with art at local libraries. At the same Bainbridge library, a mural painted by Karen Sandstrom ’12, “Where We Go When We Stay Where We Are,” signals where young readers can find the children’s section. Each of its five panels depicts a reader whose experience is reflected in imagery that blooms like thought bubbles from the books themselves.

“I hoped to inspire viewers to feel the sense of wonder and adventure that books can elicit at any age,” Sandstrom says. “Since I am passionate about books, and especially about illustrated children’s books, this was a dream job.”

Meanwhile, a photo illustration by Anna Lattanzio ’19 was unveiled in 2021 at the Willoughby Public Library. Her black-and-white image, attached to an exterior wall, shows a young boy looking into light shining from an open book.

Also, Sequoia Bostick ’14 recently completed a temporary mural on a wall outside the Harvard-Lee branch of Cleveland Public Library.

“We saw Sequoia’s work and it resonated with us, with its emphasis on color and cartoon-like illustrations that we thought dovetailed nicely with children’s literature and illustrations,” says Aaron Mason, director of special projects at Cleveland Public Library.

Bostick, originally from Nashville, Tenn. says she never noticed art at libraries in her hometown but in Cleveland art is everywhere.

“It’s important for libraries to have art because it’s an accessible place for everyone,” she says.

Callaghan agrees, saying the library is a free university.

“People are exposed to a lot of different ideas and educational tools at the library,” he says. “As an art educator, having art here makes a lot of sense to me.”

A new space
The new Bainbridge branch library opened in February 2021. Money for art was set aside in the construction budget, plus Friends of the Bainbridge Library donated funds for permanent installations.

“We had a lot of blank space when we opened,” Kusner says. “The library decided to look for local artists to fill the space with art that not only reflects the space but the surrounding area and community.”

Callaghan was a favorite. Carroll was familiar with and appreciated his previous works but he still needed approval from the library system’s Board of Trustees.

“Everyone liked Tim’s art,” Carroll says. “They thought it went well with the building, and we were excited when we saw the direction he was going.”

Callaghan was commissioned to produce nature scenes but was given artistic freedom otherwise. Once settling on the four seasons theme, he decided to use oil on canvas, which he hadn’t done for six years. Normally Callaghan paints with gouache but that approach would require framing, and the glass would reflect the natural light flowing into the library, causing glare.

“With oil on canvas, it would resonate across the room better,” Callaghan says.

Callaghan, who lives in Cleveland, then spent a lot of time in Geauga County, repeatedly driving, biking and walking a 2-mile perimeter around the new library. He stopped, sketched for 20 minutes, snapped photos and headed back to his studio to paint. The process took about a year.

The finished works are collages of scenes he had sketched and photographed. The paintings depict the white of winter, the exploding colors of spring, the energy and brightness of summer and the fading hues of fall.

“They are definitely representative of the scenes that you see around this area,” Callaghan says.

Now see this
Mason says Cleveland Public Library has commissioned art for its buildings for more than 10 years. Through a program called “See Also,” the library and LAND studio partner to install temporary art in Eastman Reading Garden, which is between Cleveland library’s two downtown locations.

The problem was that people living in Cleveland’s neighborhoods, unless they frequented downtown, couldn’t enjoy the art. So, the Cleveland library decided to expand the See Also program to outlying branches.

LAND studio asked artists to apply for a commissioned mural at the Harvard-Lee branch, then sent the library portfolios from several artists. These included Bostick, a freelance illustrator who has done assignments for Cleveland Museum of Art, Cleveland Botanical Garden and Wigs for Kids. She has also illustrated children’s books.

“I do a lot of comic-themed art,” Bostick says. “I run a local indie comic group called Vagabond Comics. A lot of my work gets viewed there and that’s how people find out about me.

“I had been applying on the LAND studio website for years, wanting to do a mural,” Bostick says. “This was finally the year it worked out.”

Bostick was the second artist chosen to create a temporary mural for the Harvard-Lee library. It will stay up for a year.

“Sequoia was given creative freedom to pretty much do whatever she wanted,” Mason says. “And it turned out quite well. It’s a beautiful piece.”

The mural, “Refresh the Soul,” shows a woman of color in a peaceful, meditative state, holding a rainbow above her head as rain falls. The work was inspired by the style of Gustav Klimt, a symbolist painter.

“I work with color theory and how color and imagery make you feel,” Bostick says. “I’m into grounding and meditation. I’m showing how I want to feel and how I want other people to feel.”

The mural began as a pencil sketch. Then Bostick used Adobe Illustrator to enlarge it to half the mural’s actual size. To scale up the piece, she created a computer canvas that was the exact size of the mural. Then Bostick sent the finished file to LAND studio, which partnered with a company that prints on vinyl to create the finished, physical work.

Art appreciation
Kristen Schmidt, manager of the Harvard-Lee library, has been amazed at the response to Bostick’s mural. Library patrons ask questions about it and want to know the artist’s name.

“I really like that people in the neighborhood who don’t have museums and art galleries on their lists of things to do can see something this beautiful in their own neighborhood,” Schmidt says. “It’s inspiring.”

Bostick says adults and children have taken selfies in front of the mural and sent her the pictures.

“I work with a lot of students in the area, so for them to see it up and be inspired by it is really nice to see,” Bostick says.

At the Bainbridge library, Kusner says patrons tell staffers that Callaghan’s paintings remind them of places they’ve been. The staff enjoys relaying the story of how the art came into existence.

“Tim’s art provides a sense of place and makes the space more inviting,” Kusner says. “It brings color and movement and brightens up the space. And we love that it was done by a local artist.” 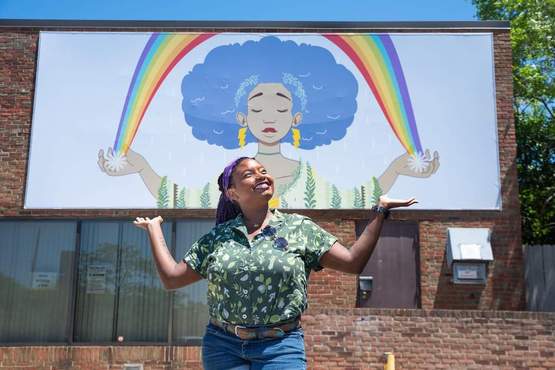 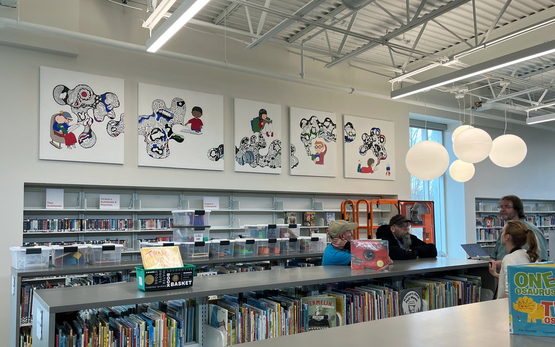 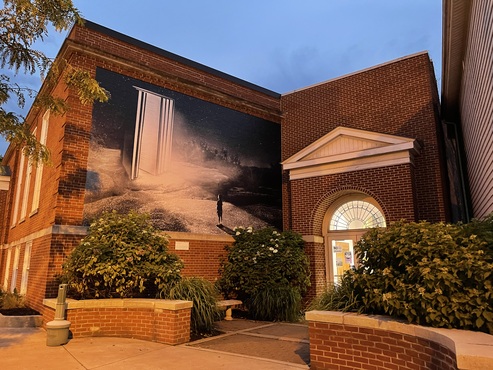