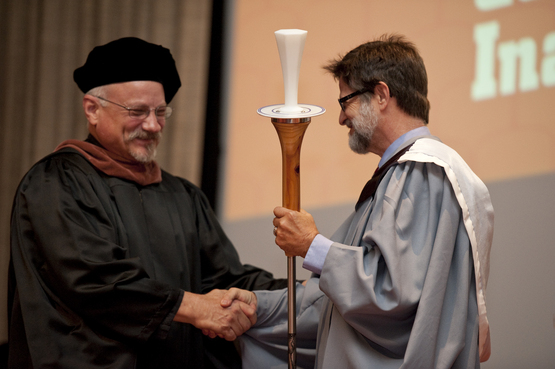 From appreciating the care and concern he showed to being impressed by his vision, Cleveland Institute of Art alumni share some of their favorite memories of retiring President + CEO Grafton Nunes.

Davon Brantley ’18, Admissions Counselor: Warming presence
When I was a student, it was always cool to see him walking around the school. We didn’t have a lot of long conversations or anything. Just a nice “Hi” and it was always warming! Now that I’m working at CIA, our conversations have not just been “Hi” and “Bye”—and I think I got to know him a bit more!

Kimberly Chapman ’17: Wise leadership, advice
I still remember the day I read the Plain Dealer article, “Grafton Nunes aims to raise national profile of CIA.” It was September 10, 2010. The story piqued my interest because my father graduated from CIA just after World War II and I thought, “Wow, here is a great person to run the institution!”

That same day, I sent the new president a note congratulating him and telling him I had a few dozen marketing ideas I’d like to share. In a flash I heard back and soon was presenting ideas to the marketing department. I brought my father’s beloved silver bowl (crafted under the watchful eye of the talented Frederick A. Miller ’40). It was wonderful to share ideas and meet such passionate people.

A few years later, I enrolled at CIA. On the first day of school, Grafton takes the stage to welcome students. “Get comfortable with being uncomfortable,” he reiterated. As a woman in her mid-50s sitting among a sea of young people, I was a bit out of my element. I took his words further to mean “be fearless, be your most creative self, work hard and don’t be afraid to fail—even if it makes you, well, feel uncomfortable.” Truer words have never been spoken.

Congratulations on your retirement, Grafton. Thank you for all that you’ve done and for your inspiration. Under your tutelage, CIA has changed my life and so many others. You will be greatly missed.

President Emeritus David L. Deming ’67: Lasting first impression
Back in 1997, when I was Dean of the College of Fine Arts at The University of Texas, just one year before I became president of CIA, I attended an international deans conference that gathered in Western Europe. I sat on a panel that discussed the challenges of our times among universities and art schools around the globe.

Among the panelists was a young man who was the founding dean at Emerson College. He was very bright, articulate, charismatic, and full of great insights about the present and future of arts education at the collegiate level. I remembered him for his thoughtful contribution to our panel and because of his unique name. I came away from that panel thinking that this was a very smart, interesting and engaging individual who had a great future ahead of him.

When the chair of the Board of Directors at CIA informed me that he would like me to host Grafton Nunes as one of the finalists for the position I would soon retire from, I immediately recalled our brief but impressive first meeting and thought, “What a great find for CIA.” These past 12 years have proven me right!

Congratulations for all that you have accomplished for our beloved institution and all the best to you in the years ahead.

Kathryn Heidemann, Senior Vice President of Academic Affairs + Chief Academic/Operating Officer: Grateful for mentorship
While the majority of my relationship with Grafton has taken place amid a time of crisis (ahem, COVID!), it has been an absolute pleasure working alongside him and watching his leadership skills shine through even in this most challenging moments. I have looked forward to our weekly one-on-one meetings, whereupon the issues I would bring forth that week would be advised with stoicism, calm, steadfast assertion, humility, and of course, humor. It has been an absolute honor and privilege to work with Grafton, and I will be forever grateful for his mentorship.

Karen Hudy, Registrar Emerita: Grateful for civility
When Grafton arrived at CIA, he brought with him a culture of civility and accountability, which had been sorely missing from the Institute following several years of intense and often chaotic growing pains. For this, I am forever grateful.

Scott Lax, Liberal Arts faculty: Authenticity stands out
My favorite memory of Grafton is from 2017 or 2018. At about 9pm, I had just finished teaching a Screenwriting class on the third floor, and as I walked down the stairs to the second floor, I saw a solitary figure walking in the Atrium. It was Grafton, who had just gotten out of a meeting. He stopped, and the two of us just stood and talked for maybe 10 minutes—about film, about our kids, probably about politics. I realized then that Grafton is the same authentic person one-on-one as he is publicly. I think perhaps these are some of his finest gifts to CIA—that authenticity, and his generosity of spirit. I am grateful for those gifts.

Caprice Odom, Financial Aid Counselor: Concern appreciated
I’d like to say thank you for your continued display of concern for our community over the years, such as always saying “Hi” and asking how I am doing; closing the school early when the weather got bad for the opportunity to get home and to our loved ones safely; early release on summer days for mental health; as well as the inception of Juneteenth as a holiday for our communities’ social well-being. For these and many other reasons, I thank you. Be well and enjoy your time with your family. You will be missed.

Skip Sroka ’77: Distant but deep connection
Grafton was in Washington, D.C. for a meeting of the National Association of Independent Colleges and Universities, of which CIA is a member. He made a lunch date with me where he filled me in about what was happening at CIA. He arranged for me to visit the “new” school. It was very enlightening.

A few years later, he was on the selection committee for a new president of the NAICU. It turns out that the committee selected one of my very good friends to fill that position. So, I thank him for reuniting me with a very good friend here in Washington.

Colleen Sweeney, Executive Assistant: Support and dedication
For me, Grafton’s legacy will be his immense support and dedication to Cleveland Institute of Art and his team members. He redefined what it meant to be a boss through his demonstrated servant-leadership. He offered his patience and guidance to create the CIA it is today. I will remember him most for the compassion he displayed time and time again, along with the little ditties he would recite, hum or sing sporadically before he left the office after a particularly long day. I am looking forward to seeing what he does next, knowing retirement might not stick right away.

Marsha Sweet ’81: Work is something to savor
Gleefully, I think of Grafton as one terrific guy. He has been open, forthcoming and engaged at all levels and with all groups. I wanted one word to describe him, and the word that comes to me has an origin in the context of food and is now used metaphorically: Grafton is CIA’s umami.