Kelsea Deininger '19 discovered her core as an artist when she was in middle school and noticed that art helped her manage her moods as the weather got colder. 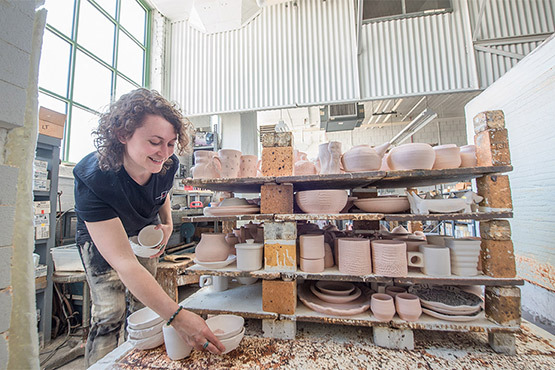 Kelsea Deininger: "You're going to be focused on your work, which is your number one priority." Photo by Rob Muller/CIA

Flash forward to today, and Deininger is elbow deep in clay as a major in the Ceramics Department. Making work is now her main focus, though it started differently.

“Art was therapeutic to me,” Deininger says. "I think it was sixth or seventh grade [when] I started to get down in the fall and in the winter. I didn't like the change of seasons, and I started feeling a pull toward art. It helped me get out of that slump. Whatever I was going through, whether it would be school or family, I could always lean on art. I was really lucky to be able to have art classes that I could go to throughout my years growing up.”

“I was really pumped about not going to college,” she says. “But my two wonderful art teachers kept telling me, ‘Kelsea, just apply to one school. Just see what happens. You can always say no.’

When it was time to select a major, Deininger knew she wanted to focus on work that would become “something that people could be using and enjoying at the same time and interacting with constantly versus something being in the background. It feels right.”

Deininger says she has found it easy to interact with other students. She has joined some groups, but there is also a natural interaction that takes place in the studios, around the work itself.

“People are wonderful. It's so fun to see how dynamic the school is,” she says. “There's only 600-some students here, but there are people from all over the world, which I find fascinating. It's kind of like I'm able to travel just by talking to other people.”