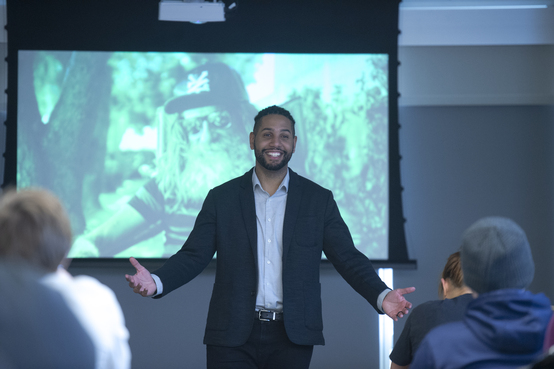 The 2009 CIA alum will deliver remarks during a virtual ceremony at 11am Friday, May 15. He considers the role “an absolute honor.”

“The last five years, I’ve done a lot of speaking in different places and I feel like I’ve been prepared for this moment,” says Peterson, 33. “This is probably the most special place I will speak because it’s where I came from. It feels really good.”

Commencement had been scheduled to take place at the Maltz Performing Arts Center but statewide bans on large public gatherings forced the ceremony online. Those restrictions have Peterson “looking forward to it even more.”

“For me, the main thing that’s amplified is what it looks like to face adversity and become an overcomer,” he says. “I have some experience in that.

“I graduated in 2009, and that was the year the economy tanked and the automotive industry went bankrupt,” says Peterson, who earned his BFA in Industrial Design. “So here I am, graduated from CIA and all of these companies I dreamed of working for were in bankruptcy or experiencing really hard financial times.”

Faced with those realities, Peterson worked on his portfolio in ways he hadn't had time for as a CIA senior. A job designing desks for an office desk company allowed him a foot in the door with design and to hone his presentation-making skills. Facing such adversity taught him valuable lessons.

“I think that was my biggest learning experience, outside of my four years of school,” he says. “What do you do when the world looks different than you thought it would?”

Peterson eventually was hired by Chrysler, then Kia, where he designed the interior of the 2017 Kia Niro.

While a student at CIA, Peterson showed interest in painting before pursuing automobile design—a story he previously shared with CIA. Painting never strayed far from his heart, and in 2016, his professional focus began to shift.

Following an encounter with a homeless neighbor in his California hometown, Peterson founded Faces of Santa Ana, a nonprofit through which he sells original portraits and prints of homeless people. Part of the proceeds help those men and women, but greater than that are the connections made and the sense of dignity often restored as his painting subjects see themselves through the eyes of the artist.

Faces of Santa Ana resonated. Peterson’s portraits have in some cases sold for thousands of dollars, and his efforts even gained the attention of BBC Three.

Peterson found his work with the homeless to be rewarding in ways automotive design wasn’t, and eventually, he faced a big decision: Should he continue down the career path he’d set for himself or focus on what he could accomplish through painting?

“I started processing those two feelings and started to realize that revealing paintings had so much more weight in my heart than seeing even my wife drive the car I designed,” he says. “It was all a heart issue.”

Peterson’s heart led him to resign from Kia in November, but not before leaving his creative mark. He has two new car designs to his credit: the 2021 Kia Sorento and another “car everybody knows” that he can’t yet reveal due to confidentiality.

That move helped clear a path for the launch of Faces of Anaheim in December 2019. The new nonprofit work with that city’s homeless and also involves young artists from the community.

“The burning desire within my heart in this new season of my life is to not only paint the homeless and show them dignity and love, but also to walk with artists and teach them how important they really are,” he says. “I feel like I have a mission deep within my heart to heal the wounds of the broken artists who have given up on their talents and dreams, and who maybe live under this Van Gogh impression of ‘I have to die in order to be successful.’”

Peterson also looks forward to his opportunity to inspire CIA’s graduating class. He hopes to help them realize that life will be their teacher, as it’s been for him, and to encourage them to “always remain curious and open to change.”

He also aims to help transform any “fear of the unknown” those in the Class of 2020 might be experiencing—similar to that which he experienced in 2009—into something that can positively impact their communities. He hopes they see that fear of the unknown can be transformed into something that positively affects their communities.

“My goal is to turn them into hope distributors,” he says. “I’m taking on the role of being able to change their language so they can give away hope to their younger classmates, their families or the people in their circles.”

It's Commencement week! That means it's the perfect time to look back at when the Class of 2021 moved into CIA's residence hall back in 2017. Such great memories! https://t.co/1sRytox7GG #ciagrad2021 #CIAcreates #clevelandinstituteofart

CIA's campusâthe University Circle neighborhoodâis America's Best Arts District! It's also a great place to learn and live! Thank you to @USATODAY @10Best for the recognition and for sharing how great @inthecircle and Cleveland are for the arts! https://t.co/YmKzRzmLHr