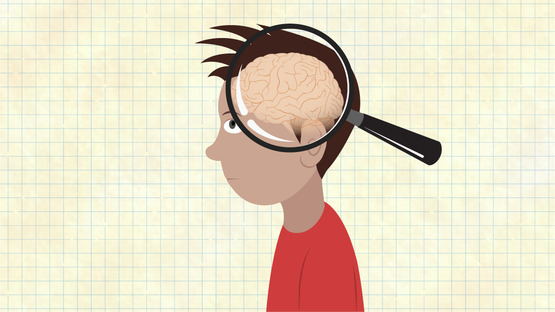 Imagine that your brain is a town, and that creating speech involves traveling through town. When you encounter no roadblocks, you speak smoothly. When you need to make sudden course corrections, you stutter.

This is the metaphor Ravenna native and recent CIA graduate Emily Hromi used in her award-winning BFA thesis project—an animated video about stuttering.

“Solving the Mystery of Stuttering” was recognized in July with an Award of Excellence in the Association of Medical Illustrators’ Salon Exhibit student category. Associate Professor Thomas Nowacki, who chairs CIA’s Biomedical Art Department, notes that this is the fourth consecutive year that CIA students have won awards from the AMI.

“I’m especially proud because this is the first year one of our students has won the Award of Excellence. And also, Emily is the only student to have won two awards from the AMI Salon which, frankly, just rocks," Nowacki said. Hromi also won the Award of Merit in 2012.

“I wanted something that would fit all requirements and also be meaningful for me. Because the Biomedical Art major combines art with science, I thought this would work out the way I needed it to—it was a scientific topic, and also something that impacted me personally,” says Hromi, who has struggled with stuttering.

As for her target audience, Hromi chose young teens who stutter, she says, because middle school is “really when negative emotions toward speech are at their worst.”

But, while logic dictated both her topic and her target audience, and her strong visual communication skills helped her translate the science to a lay audience, her project required something even more basic—sheer hard work.

“I really spent the first semester just researching,” Hromi says. “I pulled from textbooks, journal articles, clinical trials… the information is not really accessible unless you go looking for it. And, even if you are educated, it is really hard to understand.”

Hromi worked closely with Michelle Burnett, director of Clinical Services at the Cleveland Hearing and Speech Center, to determine what to include and how to express concepts understandably. It was entirely on Hromi, however, to teach herself the animation skills she needed to make the topic come alive.

Burnett calls the resulting video “excellent in every regard.” She says Hromi “managed to take a very mysterious, complex and sometimes daunting issue (stuttering) and create an educational DVD that provides the viewer with understanding and hope in a thoughtful, creative, upbeat manner.”

Even as she teaches that science still can’t adequately explain what causes stuttering, or offer universally effective treatments, Hromi maintains a positive tone, ending with a statement that’s as simple, and as powerful, as the rest of the piece: “Stuttering should never hold you back from becoming who you want to be.”

“Solving the Mystery of Stuttering” marked the completion of Hromi’s BFA, but she sees it as more a beginning than an end. She notes she’d really “like to expand it into a series; there was a lot I left out, obviously.”

Burnett, of the Cleveland Hearing and Speech Center, envisions many uses for such a series—in therapy with children, in trainings for speech-language pathologists, and in the schools. There are even “a couple of national organizations that … I think would be eager to add a product like this to their libraries,” she says.