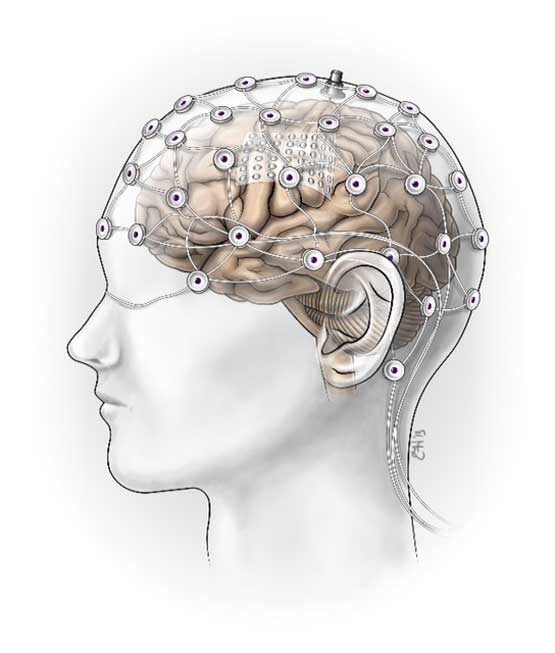 Most translators are language specialists. They change ancient Greek into English, or English into Mandarin, or speech into American Sign Language.

Emily Hromi and Erika Woodrum are translators, too, but of a very different kind: They are artists who change complex and vitally important medical information into imagery that the average person can easily understand.

Their kind of translation is helping the paralyzed to walk again.

It figures that the FES would have a staff including PhDs, surgeons, therapists and engineers. But artists? Well, think of it this way: The FES Center is a bit like a United Nations of science. All those researchers need to talk with each other, but they speak different scientific languages.

Hromi and Woodrum help them put their ideas in the common language of pictures, said Mary Buckett, a member of the FES Center’s operational-support team and the students’ supervisor.

And it isn’t just each other that researchers need to communicate with: They need to be able to explain their inventions and treatments to patients and the public, too.

“The girls are very good at identifying when a picture can be used in multiple ways,” Buckett said. “I’m very pleased to see their level of professionalism. It’s been a great experience.”

When the two students began at the center, they were given the opportunity to visit and observe the different programs, gaining an understanding of FES and seeing for themselves how the technologies work. Now, when requests for diagrams, illustrations, and other explanatory images come in from the researchers, the artists know how to talk and work with them to figure out how best to interpret their ideas visually.

The most important ability required by that first step in the process “is being able to have an open mind to what they want,” Hromi observed.

Their studies have prepared them well. “Everything we’ve learned at CIA has helped a great deal,” said Woodrum. But the internship itself has been a real education, she said, giving her and Hromi a rare chance to gain expertise in conversing with scientists and converting their knowledge into effective visual information by actually doing the work. “That is on-the-job learning,” she added.

Her professor agrees. “This arrangement with the FES Center helps give our students one thing we cannot teach specifically in the school setting – real world experience,” said Thomas Nowacki, Interim Chair of Biomedical Art. At the FES Center, “The students learn how to work on a deadline, handle client interaction and project improvisation, and work under an art director or coordinator. These are all things we can simulate in the classroom, but only by being out in the field can the students truly learn these skills.”

In addition, “The students also see how their hard work is put to use to benefit and teach a greater audience,” Nowacki noted.

Woodrum, 22, and Hromi, 21, who will both be seniors at CIA this fall, use a wide range of skills, from attentive listening to fluency with 2-D digital animation, to create the different types of visual communications on which FES researchers and the people they serve depend. As Biomedical Art majors, they’ve studied anatomy and gained expertise in both traditional and computer-based art techniques, so whether an assignment calls for detailed drawing or knowledge of InDesign software, they’re ready.

But no matter what image they create, regardless of medium or message, “It all starts with the hand of the artist,” Hromi explained.

After the two young women have talked with a researcher about a prospective piece of artwork and learned about the subject to be illustrated, they choose the artistic medium they think is right for the project. Next, they create an initial sketch and scan it into the computer; using tools such as Flash and PhotoShop, they then refine their idea. Using a pressure-sensitive digital pen and tablet, Hromi and Woodrum can draw or trace right in the computer.

“Creating work digitally is essentially like it would be done traditionally – think of it as just another type of paint or pencil,” Nowacki explained. But using the computer has advantages that traditional materials lack, he continued. “The main benefit to working digitally is the forgiveness of the medium. If a mistake is made, you can hit ‘undo’ and correct it; the piece is not ruined.”

Woodrum and Hromi are the latest CIA students to work at FES in the four years that CIA and the center have been collaborating, Buckett said. Students are paid for their work and, under the new contract the organizations have signed, the FES center can easily rotate new artists into the positions as the previous ones move on. Buckett called the arrangement “absolutely fabulous.”

The situation has been good for the young artists, too. Woodrum likes the balance of science-based informational artwork and pure graphic design the center offers her, as well as the human interaction. “Ideally, this is job I’d like to have when I graduate,” she said. “It’s been a great experience to learn how to work with people.”