News . Feature Stories . Beauty, beasts and the allure of the repellant

Beauty, beasts and the allure of the repellant 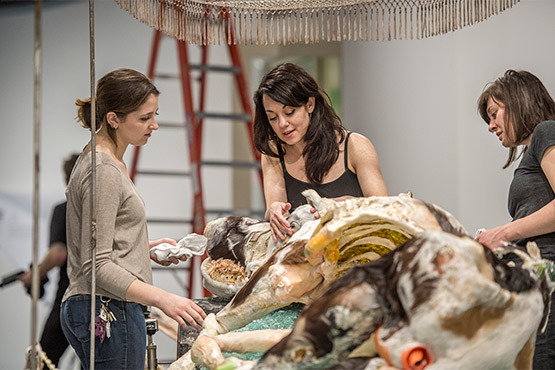 Monica Cook once made friends with a cow, and it was good.

Cow No. 52 — she had a tag in her ear — grazed on property at Skowhegan, a summer artist’s residency in Maine. Cook would walk out the door of her studio wearing a floppy hat, and 52 would lope over to greet her. They’d hang out together, the Georgia-born artist and her companion, who acted like an enormous lapdog.

“I have a very deep connection with animals,” Cook says. “There’s a purity about the relationship that you can have with an animal.”

That connection comes through even alongside darker elements in Cook’s work, which she talked about recently during her visit to Cleveland. Her sculpture “Tiller” is on view in Reinberger Gallery through May 8 as part of American Real, an exhibit of the works of three artists represented by Postmasters Gallery in New York.

Cook is a painter by training, and made a strong career for years creating masterfully realized images of women, often engaged in skin-to-skin contact with something slimy or oozing. Her work developed a strong following through the Marcia Wood Gallery in Atlanta. Then Cook started itching for change.

“I got to a place with my painting where I wasn’t doing what I wanted to do,” she says. “I was too tied to the photography, and my paintings were too tight. I knew I had some kind of world inside of me I wanted to explore and share.”

She started to build sculptures with the intention of using them as sources for paintings. Instead, the sculptures themselves became her focus, along with short stop-motion films in which she animates the pieces.

As in the paintings, the sculptures contain qualities that simultaneously attract and repel the viewer. They’re funny and mesmerizing, evoking celebration and decay. “Tiller,” for instance, consists of whimsically constructed birds towing a canopied cart on which rests a half-hollowed-out cow carcass built with found objects. Beads and bling are embedded in the cow’s cheek. Nobs of the spinal cord are made with fake fruit. Plastic tubes suggest internal functions that are, in the cow’s condition, no longer relevant.

When Cook switched styles, “everything came to a halt,” she says. “My whole audience was expecting things from me. It was like jumping out the window— super scary and super sad, because it was like a death or like a relationship that ended. But it was the best thing I ever did.”

Cook considers such leaps to be crucial to a healthy work life. “I’ve fallen into traps by doing a body of work that a lot of people liked. That work, if I were to continue to do it, would become so stagnant that if people looked at it, they would feel the boredom,” she says. “With art, it’s crucial to be willing to fail and to get humiliated and be willing to do work you’re afraid of putting out there in able to grow from it.”

After graduating in 1996 from the Savannah College of Art and Design, Cook lived in Savannah for another 12 years, where she and her boyfriend invested in old houses, renovating and then selling them. The first one cost about $50,000 and it was huge.

“It had seven wood-burning fireplaces,” she says. “We did all the work ourselves, renovating it in sections, then renting those rooms out. We finished that, sold it, and did it again. We did seven houses in seven years.”

They didn’t get rich, but Cook says it “gave me this sense of courage. It took away a lot of fear of taking on really big projects.”

She was a bit of an animal fixer-upper, too.

“I was kind of the drop-off for injured birds,” she says. “I’ve had all kinds of different animals. At one time I had five dogs and like six cats. It was kind of like a little boarding house where I could nurture something back to health and find it a home.”

That changed when she moved to Brooklyn, though one needy animal still found her. During the time she was building “Tiller,” she came across a live chicken in a box on sidewalk. Someone had abandoned it with a biscuit, a dumpling and no water. Cook called a car service, threw her coat over the box, took the bedraggled bird back to her studio and cleaned it up. She named it Coco because “it seemed like such an elegant little chicken.”

Then one day she was returning to her studio and heard a “cock-a-doodle-do” coming from down the hall. “I thought: It’s a rooster. It turned into a rooster.”

It’s illegal to keep a rooster in the city, so Cook found Coco a home elsewhere. But “Coco was amazing,” she says. “He would stand under the water and take a little shower. He’d take a little bath and just sit in the water. He was just very personable.”

It can be difficult to reconcile the Cook’s sweet, sensitive manner with the more phantasmagoricalsides of her work. People who haven’t met her often assume she’s much gloomier than she is — or worse.

The comments section of her animation works on Youtube can be brutal. “Too many [expletive] mentally unstable people walk this planet under the guise of being an ‘artitst’,” wrote Tom K after watching Cook’s piece, “Volley.” Beneath a work called “Deuce,” someone with the handle louvelle957 wondered “how does she make these sculptures without vomiting?”

But Cook says that her art is an exploration of what interests her. “Sometimes it’s about things that make me really uncomfortable, but I’m approaching them through the eyes of beauty — or in a more innocent, curious way,” she says.

It’s also true that what others see as grotesque or repellent sometimes just doesn’t strike her that way.

“It’s hard for me to see the work in the way that other people see it,” she says. “It’s probably like someone who has a really unruly child and they can’t see it. They can’t see that their child is so horrible. They just see the beautiful qualities of their child.”