News . Feature Stories . Answer for a solitary studio: The Salon

Answer for a solitary studio: The Salon

These critique-group friends find inspiration and camaraderie in their monthly meetings. 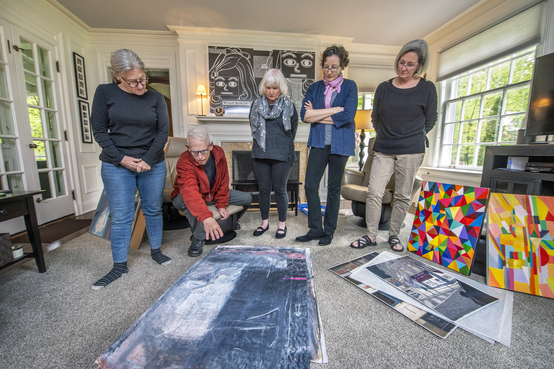 For much of her career, painter and printmaker Bonnie Dolin has made representational art. But she’s exploring a new direction, so today she brings a pair of abstract works to her artist group, The Salon.

The meeting is at the Cleveland Heights home of Jennifer Leach. Dolin, a 1973 CIA grad, props the pieces against a chaise longue so her friends can examine them closely. The canvas on the left is a gathering of triangles that coalesces into pyramids and cubes. The work beside it is a collection of various shapes that feel more two-dimensional in a palette of orange and yellows broken with blues and golds.

“My interest here is just fitting together a variety of color and not pre-planning,” Dolin says. “I want it to be spontaneous, but at the same time, it’s not: spontaneous in terms of use of color and shape.”

Dolin and Leach are among five artists who comprise The Salon. Three are CIA alumni: Tom Roese earned his BFA in drawing and graphic design in 1971. He spent 32 years teaching art and now makes art full time. Leslye Discont Arian, a 1976 grad, majored in ceramics and minored in painting. Leach is a Kent State University alum. Mindy Tousley is a graduate of State University College of Buffalo.

For four years, Salon members have been gathering monthly to push and support each other by offering insights gained from decades as professional, award-winning artists. Leach got things rolling when she approached Roese about starting a critique group. Roese remembers feeling ambivalent.

“I think I smiled and I looked pleasant, but I was thinking, ‘Oh no!’ Because I don’t want to give up time (in the studio),” he said.

Nevertheless, he suggested inviting Dolin and Arian. The quartet were founding members of the group and Tousley joined later. Members bring whatever they’re working on during the month. The critiques are pointed and direct, if not automatically followed. “We don’t always take each other’s advice,” Arian says.

Most importantly, though, The Salon provides community in a profession that can be extremely solitary.

The community of The Salon has spread into the virtual lives of its members. They text each other about their successes and frustrations; they share examples that will inspire and inform.

So what tips do they have for artists who want to replicate their model?