Animation student grabs the keys to unlock the dream 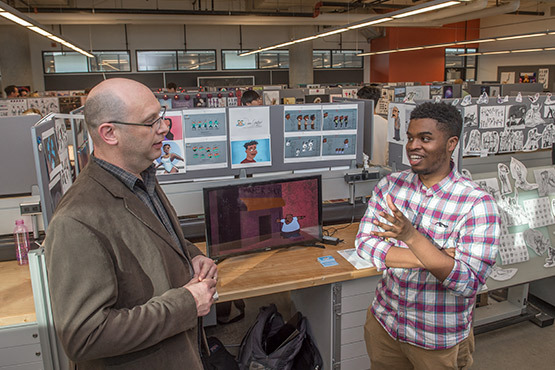 If there’s an art to doing art school, Noah Cutwright seems to have mastered it.
From the time he started at CIA, Noah — an Animation major from Baltimore, Maryland — decided two things.

First, he would take advantage of what living in Cleveland has to offer. “In my freshman year, I thought, OK, I don’t want to be stuck in the residence hall,” Noah says. “I don’t have a car this year, but I gotta figure out how to get around. [CIA] gave us a free bus pass. That bus pass really did help. I explored all over.”

Second, Noah has made the most out of critiques from his instructors and peers. “Any advice that anybody gives you, learn to take it and try to apply it to your work,” Noah says. “Nobody here is trying to tear you down, everybody is trying to help you.”

That method has worked well for Noah. The summer after his junior year, Noah was hired for an internship at the Cartoon Network in California. It was a great beginning for a guy who set his sights on animation when he was a kid.

“I’ve known I wanted to be an animator since I was 8 or 10 years old,” he says. “I used to go to the library and get this book every week. It was called The Art of Walt Disney, and I remember checking that book out till I read it from the beginning to the end. I grew up loving Disney movies, loving Pixar movies, and loving cartoons in general. I remember thinking this is really cool that this is an actual job and people get to go to work every day. I don’t really want to be a grownup, but if I had to be a grownup, it would be to do this.”

Animation is competitive, but Noah’s real-world experiences at CIA give him an advantage that shows up in sharper skills and a better resume. As part of a community projects course in his junior year, Noah and his were hired by American Greetings to create five web-only animations featuring the Care Bears in stop-motion style shorts that imagine the toys coming to life.

“I had made animations before, and done storyboarding for a class before, but I’d never really worked in a pipeline before. Being able to work in a team, working off of other people, is just a really great experience to have. “

Down the road, Noah hopes to be a full-time storyboard artist for a big studio. “The dream is always Disney or Pixar,” he says. “I really just love telling stories, and that’s always the dream.”