A story of loss and love, Slumber with Snakes was recently named a finalist in the âAnimation (Domestic)â category. 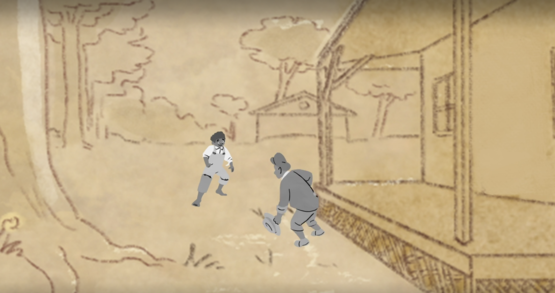 Still from Slumber with Snakes by Teagan Barrone â21 Animation

Teagan Barrone graduated this past May from CIA's Animation program. A critical component of CIA's graduation requirements is a BFA thesis project, a research-based creative project of the student's choosing. Barrone chose to create an animation about Glimes Hollins, a young Black boy living in the American South in the 1920s.

Barrone's work, Slumber with Snakes, earned her a Student Academy Award semifinalist nod in July. She was named a finalist on August 11. At the virtual awards ceremony on Thursday, October 21, Barrone earned a Bronze in the Domestic Animation category.

Barrone chatted with CIA to discuss Slumber with Snakes, her inspiration and her goals for the future:

How did you learn of—and become interested in—Bob Hollins' (and his father, Glimes) story?

It was a story I’d heard from a young age. Bob Hollins did not shy away from telling me the truth about his father’s past. More than a grandfather, more than a friend, and even more than a mentor, Bob was the example of a person I wished to be. I wanted to share his revelations and listen to his stories all day—and he liked sharing his stories all day. It should be noted that Bob and his wife Marcia also gave me an obvious illustration of what relationships and marriage could look like for me.

One day, Bob sat my dad down and told him the story of Glimes. I happened to be there, listening intently and soaking up every detail. The fact that this boy no older than 11 could endure so much was curious to me, and I was only a little older at the time.

Bob explained how Glimes in life loved hats, never learned how to read, and had a heart for everybody. However, I couldn’t get the tragedy and brutality out of my mind, day and night—and I knew my heart yearned to do something with what I had been given.

As I grew older and got into high school (realizing I had a passion for art), I attempted to turn this story into a video. It would be half-documentary and half-illustration. Nothing I made was satisfactory or represented the story correctly. I had guilt for many years after never completing the project.

However, senior year at Cleveland Institute of Art, I pitched three BFA thesis ideas, with Bob’s story as one of them. My professors, classmates—and eventually, I—knew this was the clear choice.

What were the inspirations for your visual approach to the story?

I had many inspirations. During my Foundation year, I grew fond of gesso, ink, and package-paper paintings. That fondness would be later implemented into my backgrounds. I also had many old family photos dating back to Bob’s great-great-grandmother and wished for the film to seem older yet refreshed. As for other inspirations, I’ve always been drawn to the stylization of E.H. Shepard’s work in Winnie the Pooh.

How long was the project, start to finish?

The initial work took place the summer between my junior and senior year. However, this had been on the back burner of my mind for years and years. Bob tells me that it may have been made for such a time as now.

How did it come about that your work was submitted for the Student Academy Awards? How did you learn you were nominated?

My professors—Anthony Scalmato, Steven Rawley, Hal Lewis, David Schwartz and Lincoln Adams—did not hesitate to stress how important it was to submit my film somewhere. I listened earnestly and did not have any expectation on what was to happen next.

I found out I was nominated when I received a notification from a friend on Facebook wishing me congratulations. After that, I was flooded with well-wishes and overcoming emotions that left me incoherent for a long while after!

What drew you to CIA to study Animation?

I had seen other schools. I had toured in other cities to see what they had to offer, but nothing sat right until CIA. My mother and I will testify to feeling like we walked right into an actual art studio/animation studio. Nothing at CIA looked like what we had seen before and definitely was not another stale classroom. Every inch of the building was alive, and every department felt so personal. CIA gave me a sense of what working in the industry may feel like! There was no other choice after that!

As for Animation, I have always been inspired by masters like The Nine Old Men, Hayao Miyasaki, and Glen Keane. Drawing is fine, and I love illustration, but breathing life into something and making it move is empowering!

What's next after CIA? What are your plans?

My plans in life are to work full-time for a studio, publish my stories for the next generations and travel across the world to make new companionships! I also want to continue sharing the same ideas as in my BFA: choosing love isn't always easy, but it is worth it.