World-renowned animator Walt Disney is often credited with saying, “If you can dream it, you can do it.” Cleveland Institute of Art student Alasia Gordon ’23 is putting that saying to the test this summer by making the most of a dream opportunity.

Gordon, a rising CIA senior, is currently a CG Animation Intern for Walt Disney Animation Studios. She earned the position by being named a 2022 Disney UNCF Corporate Scholar, a program resulting from a partnership between The Walt Disney Company and the United Negro College Fund. It’s a virtual internship for the Burbank, California-based company that started in May and runs through the end of July.

We caught up with the Animation major and Maple Heights, Ohio native to ask her about what she’s learned and gained so far from her experience.

This internship sounds really cool. What does it entail? What are you working on? How have you liked it?
I can confirm that this internship is very cool! Interning for Walt Disney Animation Studios means that I am getting paid to learn and practice my craft in a professional setting with experienced people in the animation industry. The projects that I receive test what I have learned before I started and they also enlighten a lot of the parts of animation that I have yet to really advance in.

For example, my specific focus in an animated film is 3D character animation. Up until now, I felt like my idea of animating was to just make the character move. That’s not a wrong answer, but in order to really push the believability of the character being alive, you have to zone in on the character’s performance with their personality.

I like working on these exercises because it really makes me think about my choices before I make them. I’m gaining real experience, and it’s fulfilling when I can accomplish something I struggle with and learn new ways of doing that.

What opportunities have the internship afforded you so far that you might not have otherwise had?
This internship has provided me with more time to actually focus on what I want to do for a career full time. I have access to a lot of resources for learning that aren’t available for the public and I am also networking with other animators around the studio. A few of them have even turned into good friends.

What are the biggest things you’ve learned so far?
The biggest thing that I have learned so far is that age and experience in the industry matters. I’m often very hard on myself because I have high expectations for my work. When I first started my internship, my workflow was completely thrown from my usual routine because there was the obstacle of adjusting to new tools and different ways of doing things that I hadn’t exercised before. I felt ashamed because my animation didn’t look great, but while conversing with another intern about it, they made me realize that this was normal.

There is no shame in not knowing something and if I really think about it, technically, I didn’t have any real work-industry experience. This is my first internship at an animation studio and my mental maturity is still kind of in that teenage state, where I’m a young adult but I still have room to grow and fill the gaps with more knowledge—which can only come with time.

In what ways have your CIA professors and/or classmates helped prepare you for this opportunity?
CIA has prepared me well for this opportunity because I have adjusted to learning the manual way of doing a lot of things as well as a generalist mindset for creative work. My internship has a lot of tools to enhance workflow and make me faster, but I also know how to work without them. My professors helped to train my eye for composition and always encouraged me to keep polishing my work. My classmates were also very supportive along the journey.

It looks like this internship came about because The Walt Disney Company and the United Negro College Fund named you a 2022 Disney UNCF Corporate Scholar. Congratulations! Will you describe how that process worked and share how you felt when you learned you and your work had been recognized in this way?
I felt ecstatic finding out that I had been recognized for my animation. When I first applied to the Disney UNCF Corporate Scholars Program, I didn’t realize that it would lead to my position today. I was honestly just looking for scholarships to finish my final year of college and this one included an internship through the Walt Disney Company. I had never heard of this program prior to applying, but with the application deadline approaching quickly, I rushed together a demo reel of my work, typed one or two essays and submitted. About a week later, I got a response for a recorded interview. I did that, waited again, and then I heard back about another interview. This time with a real person.

This was a month when Walt Disney Animation Studios had also opened their application submissions, so while waiting for an interview with UNCF, I had also submitted to Walt Disney Animation Studios. When the time came for my in-person interview, I had no idea that I would be interviewing with a recruiter from Walt Disney Animation Studios. I won’t reveal names, but I knew of this person prior to meeting them and had no idea that this scholarship that I applied to was essentially a doorway into one of the most popular animation studios in the world. We talked about regular stuff, nothing out of the ordinary, but then they also mentioned that they had received two applications from me. One from UNCF and one from the Walt Disney Animation website portal. I had double applied, and this really showed how much I wanted this. I showed my interest by being persistent, and a few months later, I received an acceptance through a phone call while eating breakfast.

Through this experience, and from what I’ve learned from other people so far while interning, is that it is possible to get in through the back entrance. You just have to seek these opportunities, and while they may not seem official, they can turn into something way bigger. You just have to be open to it.

What advice would you offer other students seeking internships?
Internships are often hidden, and there are a lot more available than what is posted on company websites. Granted, I did find my internship online, but I was not exactly looking for that. I was searching for a means to avoid student loan debt, but got a cool internship out of it. Scholarships are there to help students and many of them do include internships, which I feel is not talked about enough. A lot of organizations, like the UNCF, also have websites that are strictly for the purpose of posting these types of scholarships as well, so it’s just all about where you look.

What are your plans after you graduate from CIA? How might this internship be helping you make that decision?
After I graduate from CIA, I’m going to apply myself and my work. I don’t want to make my internship about getting a job, because that puts a lot of pressure on my heart and mind to impress. I just want to learn from it—and it’s helping a lot because I make mistakes and I’m being taught the proper way of doing things in a studio environment. I know what I need to aim for and I have a better understanding of what’s expected. This makes me more confident, and I feel good about what will happen after I graduate.

I am also going to pursue my passion for directing films. I am an animator for my profession, but I also design worlds and write screenplays for series and shorts in my own time that I would really like to start production on. I have a lot of good and talented friends that I have worked with on animated films in the past, and making more shorts would be really fun.

Animation major Alasia Gordon created “Hurry to Leave”—featured at the top of this article—as part of her studies at the Cleveland Institute of Art. This summer, she’s using those same talents as a CG Animation Intern for Walt Disney Animation Studios. 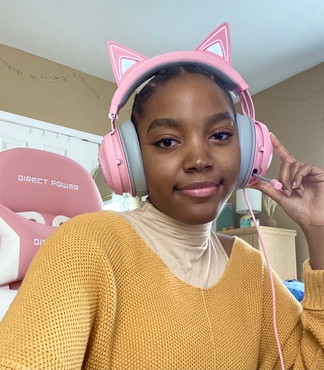