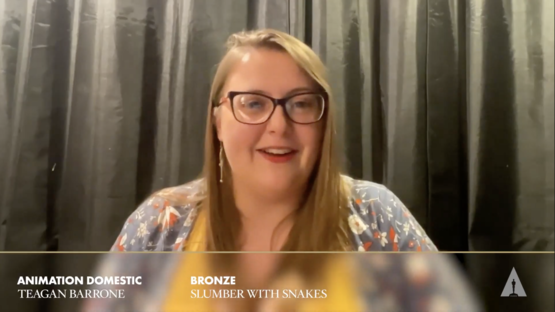 The Cleveland Institute of Art’s Animation program has a rich history of contributing to major films. Need proof? Simply visit CIA’s Animation studio, where you’ll be greeted by a wall of movie posters that represent alumni creativity.

But even with that illustrious history, the College had never won a Student Academy Award. That all changed in October 2021, when Animation alum Teagan Barrone ’21 earned the Bronze in the Domestic Animation category for her BFA project Slumber with Snakes.

Animation chair Anthony Scalmato ’07 says the Student Academy Award is one of the “most prestigious” a student can receive in filmmaking.

“Over the last few years, we have had only a handful of students submit their films, with a number of them receiving Regional or Semi-Finalist Awards. The CIA community was excited to learn that Teagan was honored as an award winner,” he says. “Awards such as these provide incredible opportunities for students as well as increase exposure to the work that they do.”

CIA President + CEO Grafton Nunes says that in his previous experiences at Columbia University and Emerson College, winning a Student Academy Award marked significant milestones in those schools’ developing reputations and prominence in the media-production field.

“Although CIA students have been distinguishing themselves in the animation field for almost 90 years, our Animation program as a standalone department is merely a decade old,” Nunes says. “This recognition of Teagan’s work, along with the designation of our department as the second ranked 2D animation program in the world by The Rookies solidly establishes CIA among the premier schools in teaching animation. Teagan’s film illustrates the strength of our students’ work: strong narrative, strong sense of character and technical brilliance.”

Slumber with Snakes is about Glimes Hollins, an 11-year-old Black boy who lived in the American South in the 1920s. Hollins is separated from his friend while being chased by an angry racist mob. Based on a true story, the 6-minute animation explores themes of facing and overcoming fears. (Watch at cia.edu/teagan.)

Scalmato notes that former CIA students have gone on in their careers to receive Academy Awards, Emmys, Eisner’s and many other accolades.

“Their work has inspired generations, and it’s one of the reasons so many students choose to pursue careers in animation,” he says. “Adding a Student Academy Award alongside our past student accomplishments—such as Student Emmys, film festival awards and other competitions—is something we are incredibly proud of. Students today will inspire future generations, and they have important stories to tell.”

What has laid the foundation for all this recent success? Scalmato credits the CIA community past and present: dedicated faculty who are accomplished and well-connected industry professionals, as well as talented alumni.

“When you pair the education, support and vision that CIA provides to talented, open-minded and hardworking students,” he says, “it’s only a matter of time before students reach their goals and become recognized for the work that they do.”