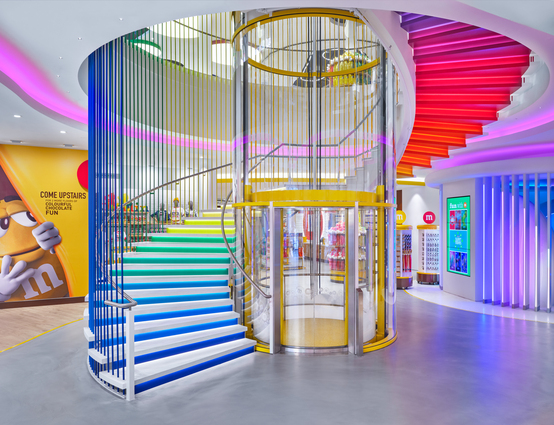 The spiral rainbow staircase at the M&MâS flagship store in Berlin, Germany. Courtesy of Ivan Ruvolo.

Since Caitlin Gollini ’13 graduated from CIA, she has barely had any down time, let alone a dull week. Interior architecture engages all parts of the brain, pressing ingenuity into the service of a total experience. Such work is rewarding and stimulating—and it takes discipline.

Gollini advises students considering a career in the field to develop endurance. “Work on your stamina,” says Gollini, whose résumé includes work for DB Studios in the Los Angeles suburb of Irvine, California; WD Partners in Dublin, Ohio; and Chute Gerdeman in Columbus, Ohio. She now works for Landor & Fitch in Columbus.

Learn how to pace yourself, know what your time is worth, and find a work-life balance, says Gollini, a Strongsville, Ohio native who cites CIA mentors such as Sarah Kabot, Charles Bergengren, Richard Fiorelli, Joyce Kessler and the whole Interior Architecture department for helping her develop the skills necessary for her career.

“Don’t drain all of your stamina on one project or start to experience burnout, because the second you’re done with a project, you’re almost immediately handed the next one—which always has a shorter deadline than the last one.”

Ivan Ruvolo ’14 is nostalgic for his CIA years. He wishes he had taken time “to learn more when all I had to do was learn. Now that I’m growing up and getting older, I wish I had the time to just sit down and learn a new program.”

Looking back on his CIA days, Ruvolo misses taking the time to sketch out ideas for fun instead of having to crank out concepts on deadline. “My last piece of advice would be to enjoy college and take advantage of it while you can,” he says.

Six years ago, Ruvolo was named “one to watch” by VMSD, a digital magazine that covers retail design. Cited for speaking his mind and for bold ideas, the 3D designer also stressed fun, saying, “How can we design spaces where we want visitors to have a fun experience if we aren’t even having fun designing it?” No wonder the M&M’S projects for Landor & Fitch were such a good fit for Ruvolo.