A Night for a Knight: John Ewing Award Ceremony + Film

On Feb 3 the Cleveland Institute of Art and the Cleveland Museum of Art honor our own John Ewing, Chevalier in the Order of Arts and Letters of the Republic of France. 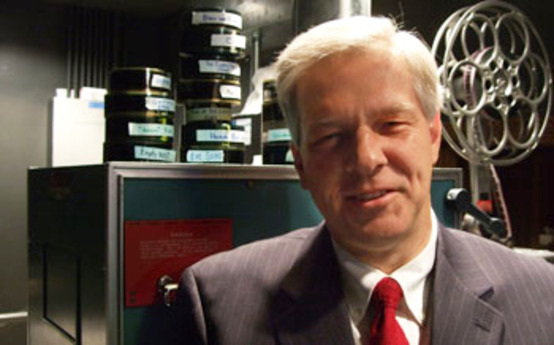 Last summer, Cleveland Institute of Art Cinematheque Director John Ewing was named a Chevalier (Knight) of the Order of Arts of Letters of the Republic of France for his many years of promoting French culture at both the Cinematheque and the Cleveland Museum of Art (CMA), where he is associate director of film. This distinction adds Ewing to an impressive list of international artists, including T.S. Eliot, Robert Redford, Jeanne Moreau, and Rudolf Nureyev.

On February 3 at 7:30pm, Marie-Anne Toledano, cultural attaché of the French Consulate in Chicago, will officially present Ewing with his award in a short ceremony hosted by CIA and CMA in CIA’s Aitken Auditorium at 11141 East Boulevard.

Following the ceremony and cocktail reception, the Cinematheque will show one of Ewing’s all-time favorite French films, Le ciel est à vous (The Sky Is Yours, aka The Woman Who Dared). Jean Grémillon’s 1944 masterpiece, undistributed in the U.S. and shown here in a rare archival print, tells of a provincial married couple (Madeleine Renaud, Charles Vanel) whose mundane, middle-class life together is turned upside down by a sudden passion for flying.

An exclusive preview party for members of the Cinematheque and CMA film program will be hosted at 6pm by Cleveland’s top French brasserie, L’Albatros, featuring its sommelier and fromager, Brandon Chrostowski. Contact 216.421.7450 or cinema@cia.edu for information and tickets.