What kinds of things can happen to an artist in half a decade? Grad school and new jobs, babies, and earned wisdom, to name a few. Illustrator Nathan Ward is among five grads we checked in with to see what theyâve learned since 2014. 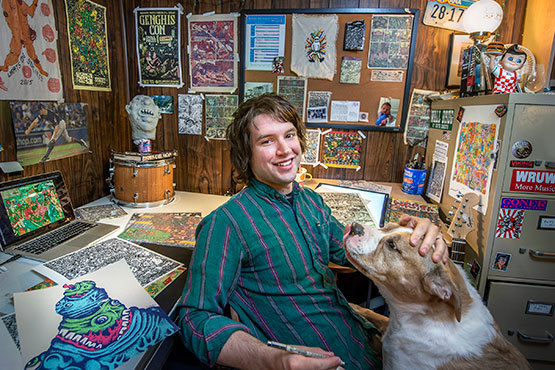 What are you doing for a living these days and how do you feel about it?

I’m working as a freelance illustrator, also working on a monthly comic series for my Patreon, and during the day, and sometimes evenings, I work at the production facility at Mitchell's Homemade Ice Cream. I’m also a Continuing Education instructor at CIA, where I’ve been teaching comic/zine classes with a strong focus on self-published, alternative, and DIY perspectives.

I also teach mini-workshops at public libraries in the area for children and young adults. Me and my wife bought a house in West Park in Cleveland a couple years ago and we love it.

What’s been your most satisfying professional accomplishment since college?

My most satisfying professional accomplishment was receiving a Cuyahoga County Creative Workforce Fellowship in 2016. I applied on a whim, wrote a lot of essays, assembled a portfolio, and got the call minutes after my son Newt was born. It pretty much allowed me to work on art full-time for almost a year, which culminated in the release of my anthology series, Warpwish Comix, and a coinciding solo show. Getting the fellowship came at a time when I wasn’t feeling particularly optimistic about the financial aspect of my creative pursuits, and I really think it helped me to realize I’d made the right choice.

What has been your most satisfying personal development since college?

In the most general terms, real life experience. I’ve always tried to do as many different things, travel to different places, tour whenever possible, and work different jobs. I personally think my art is enhanced if I’m out doing things, not just living in my studio and only ever leaving to go to Pat Catan’s (RIP). I value the idea of living in harmony with art and not letting life or art consume one another. I’ve been a dog trainer, carpenter apprentice, beer truck driver, got certified in a few types of welding, and I had two kids and got married and stuff. It all seems pretty aimless, and maybe it is, but I think there’s a lot of story to pull from there. It’s all just creative fuel.

My biggest surprise was probably the amount of traveling that has been opened up to me through making comics. I’ve exhibited in small press conventions in Seattle, Toronto, Pittsburgh and Chicago, and always have had some sort of fulfilling experience. People just want to meet creators, trade comics, trade zines. There’s a whole culture, a whole community out there. I haven’t delved into the world of artist residencies, due to the fact that I have babies at home, but there are plenty of opportunities there, too.

I’ve also been surprised that I’ve done so much freelance, to be honest. I was an Illustration major but my intention was to get my comics published upon leaving school—not seeking clients. It’s been cool though, I’ve done a lot of record covers lately and those always have a really satisfying end result.

Can you describe what kind of student you were in college?

I’m not sure. I was laser focused in a direction that was probably hard for a lot of instructors to help me navigate. I was the kind of student that didn’t like being watched as I worked, so I preferred to do my dirty work at home. It’s kind of like being in a public restroom at the urinal and someone comes in and picks the one right next to you. Can’t you please pick another urinal? That was my attitude in college. It was just lack of confidence in my work—I would be ready to work around people when I truly honed my craft, I thought.

But the learning comes with working around artists; stumbling in the presence of people who are working through their faults as well. That’s something I didn’t get used to until after college.

That being said, I think I always did my best to absorb things from instructors and during critiques, lots of tips and tricks. Oh, and I think I got a C-minus in my comics course.

Was the transition to the so-called “real world” difficult, easy, or something in between?

I’m not actually sure that first hard-hitting real world transition seemed to happen until I had my first kid. I’ve been working odd jobs full-time since high school, even during the most grueling semesters at CIA, so my life has always been an insane balancing act of digging out hours day by day to work on art.

Is there anything that sticks with you from your college days that has been especially helpful or useful?

I did a lot of self-promoting and sought out freelance work while in class. This helped put Taco Bell on the table, but it derailed my school work at times. But I think making connections and networking in the real world helped build some longer lasting relationships.

If you could travel back in time, what would you tell your younger self?

Take more fine arts classes (painting, sculpture, etc.), jump out of your comfort zone before you find your comfort zone, and make connections. I’ve always wanted to tell stories with my art and approached my work from a fine arts perspective, and I think I leaned on the client-customer applied arts approach too much in college.

Also, think long and hard about where you devote your energy. I’ve been actively touring and putting out records in punk bands for years, but I have still always internally juggled the amounts of the time I spend on my music as opposed to visual art. I’m still not sure if that’s something I would change. Also, I’d tell myself to make stronger connections with my classmates and network within the school itself. Believe it or not, these people succeed and can help you. The few connections I’ve made have been so valuable that I wish I made the effort to reach out more often.

I’d also tell my younger self to ask for the manuscript copy of Charlie Bergengren’s textbook-in-progress. Unfortunately, he’s no longer around, and I never really had a relationship with him, but his lectures were fascinating. I recorded a few of them but, of course, can’t find them. His ability to elevate the folk artist and the grotesque and intertwine those sensibilities with architecture was so seamless and insane and beautiful. I took his class in my very first semester at CIA and so much of what I learned has informed my current practice.