What kinds of things can happen to an artist in half a decade? Grad school, new jobs, and earned wisdom, to name a few. Painter Ben Weathers is among five grads we checked in with to see what theyâve learned since 2014. 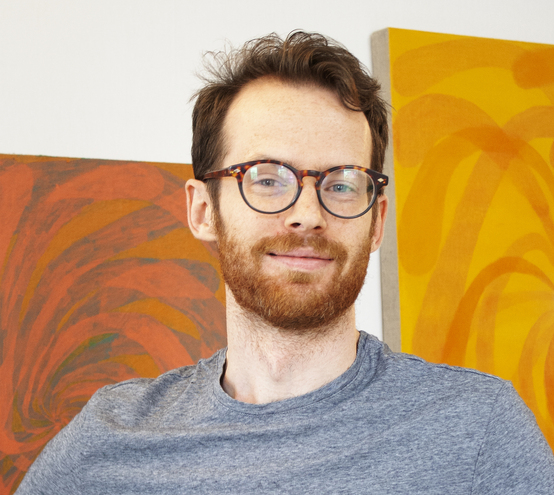 Where do you live and what are you doing for a living these days?
I live in Jersey City, New Jersey. I moved from Cleveland to pursue graduate studies at Mason Gross School of the Arts at Rutgers University. I live and share studios with my partner, sculptor Sam Bogner Ê¼14. For work, I adjunct teach 2D design and color theory at William Paterson University and Rutgers. I also do freelance carpentry and art handling for museums around New York City—the Queens Museum, Newark Museum, and Guggenheim are a few places I have been working.

It has been such an amazing experience being an artist in the New York area. I have encountered so much art I would otherwise have never seen and have a really supportive community of peers.

What’s been your most satisfying professional accomplishment since college?
Earning an MFA has been so impactful toward my studio practice and in finding work to support the studio. An MFA has allowed me to pursue teaching and has been the basis for building a community of likeminded artists and thinkers.

What has been your most satisfying personal development since college?
Being able to balance a studio practice while trying to make a living. For me, I am lucky enough to have jobs that deal with art. Things I encounter in my day jobs have an impact in the studio and keep me engaged in a contemporary art scene.

Biggest surprise?
Being an artist is hard and it can often be isolating when you’re trying to make work outside of school. I’ve really had to hustle to make enough to live and support the studio. Being out in the world has forced me to adjust my values and goals for my artwork and life. This has meant sacrificing a lot of things in order to find some stability.

Can you describe what kind of student you were in college?
I think I was an attentive and eager student. I really wanted to engage with my professors and peers—to learn as much as I could during my time at CIA.

Was the transition to the so-called “real world” difficult, easy, or something in between?
Difficult. Nothing really prepared me for the extreme amount of work, time, and energy it takes to sustain a creative life. I think I have been lucky to find work that is in the arts and have a supportive community around me. However, I think over the last five years the kind of naive ambition I had in school has fallen away. Now, I want my artwork to have a lower impact—to be viewed by people who truly care about looking. That feels more sustainable over a lifetime rather than striving to be some kind of art star.

Is there anything that sticks with you from your college days that has been especially helpful or useful?
Every skill that has been useful outside of school I learned at CIA. I learned how to build and make things with a sense of beauty and craft. However, more than anything else, I learned how to problem solve and think critically. This has prepared me for so many situations where a creative solution is needed or a different way of approaching a topic reaches a student who is struggling.

If you could travel back in time, what would you want to tell your younger self?
Pay attention.

What’s your next goal?
A more balanced life between work and studio. Make more things.