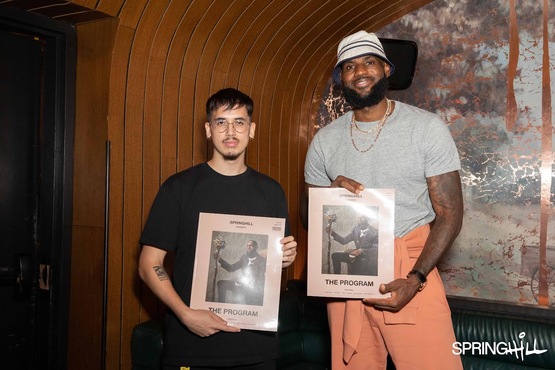 CIA alum Maxmillian Peralta, left, poses with NBA superstar LeBron James as they display the debut issue of "The Program," the cover of which features Peralta's portrait of James. Courtesy of SpringHill Company.

Peralta was commissioned for the project due to his artistic style—which combines his creative interests in high fashion, streetwear and portraiture—and for his Northeast Ohio roots.

"I think for any Cleveland native, LeBron just means so much more to us. He represents us, and he represents us well," says Peralta, a 23-year-old resident of Cleveland's Tremont neighborhood and native of Lakewood, Ohio. "I love his mantra about how nothing in Northeast Ohio is given, everything is earned. I feel so many ways about this project, but mostly for me to be able to paint this cover for him shows to me that I must be earning this opportunity through my hard work behind the easel."

Peralta received the commission in May 2021, just as he was graduating from CIA with a Bachelor of Fine Arts degree in Painting. A SpringHill Company creative director familiar with his work connected Peralta to the company's talent manager, who eventually reached out about the opportunity. Peralta received the official pitch via email while waiting for a table at a restaurant.

"The pitch blew me away when I saw what my involvement would be," Peralta says. "I just remember sitting on that bench losing my mind about this opportunity. It was something special. I was at a dinner to celebrate my BFA but I was thinking about something else entirely. You have to understand that I just finished presenting my senior thesis, so I was already on cloud nine."

Peralta then worked on the commission through June and July 2021. Tasked with "reimagining LeBron in a victorious, visionary pose in the style of classic portraiture," he incorporated Louis Vuitton-like "LJ" logos on James' sport coat; a royal scepter inspired by King James' Fortnite skin; and jewelry that pays homage to James' four NBA championships and line of Nike shoes.

The finished oil-and-acrylic-on-canvas painting measured 50 inches by 40 inches, and with assistance from CIA's Reinberger Gallery, was shipped to SpringHill Company's New York offices. A digital scan was used for the cover of the magazine.

Peralta met James, a native of Akron, Ohio, during a June 23, 2022 launch party for The Program in New York.

"He was larger than life," Peralta says. "His team tapped me on the shoulder and told me that he wanted to meet me and get a photo while I was there. While I was standing next to him in the VIP section, I told him, 'I just flew in from Cleveland yesterday, bro.' His eyes lit up and we talked about back home for a bit.

"I probably still haven't fully comprehended that experience. I got to dap up LBJ. Twice."

Only about 250 copies of The Program were printed and all were distributed to James' inner circle. Peralta has two copies. The inaugural issue is about 100 pages and includes feature articles on photographers, illustrators and other creatives; narrative elements, such as short stories and poems; and interviews with athletes, including Cleveland Heights native Travis Kelce, a Pro Bowl tight end for the Kansas City Chiefs.

On-camera or over-the-phone interviews with Maxmillian Peralta—to discuss his contemporary artwork, his experience on this exclusive project for LeBron James' company, and the unique timing of receiving a high-profile commission as he was graduating from CIA—are available upon request.

Also available upon request are high-resolution files of the photos on this press release (credited to SpringHill Company); direct contact info for a SpringHill Company source; and interview opportunities with CIA faculty who taught Peralta while he was a student.