Lunch on Fridays: Julian Stanczak + To Catch the Light 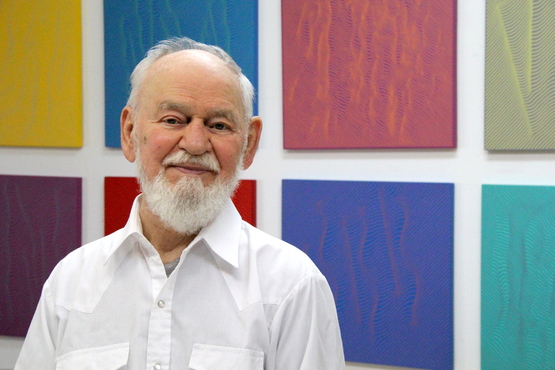 Julian Stanczak, a 1954 CIA grad and longtime CIA faculty member who also was a pioneer of the Op Art movement of the 1960s.

Spend your lunch hour watching an encore screening of To Catch the Light, a moving documentary about 1954 CIA grad and longtime faculty member Julian Stanczak, during Lunch on Fridays.

This free screening will take place from 12:15 to 1:30pm Friday, November 4 in the CIA’s Peter B. Lewis Theater.

Born in Poland shortly before World War II, Stanczak lived an eventful, peripatetic life that saw him relocating from Poland to Siberia, Iran, Uganda and the United Kingdom before finally settling in the U.S. in 1950. While in a Soviet gulag, he lost the use of his right arm, forcing him to learn to paint (and do everything else) with his left arm.

This new Polish documentary, eight years in the making and directed by Tomasz Magierski, draws upon archival photographs and film clips, and previously unseen interviews with the artist, to recount Stanczak’s remarkable life and his triumph over adversity. The movie also shows Stanczak at work and explores his fascination with color.

To Catch the Light received its world premiere September 18 at the Cleveland Institute of Art Cinematheque, a screening that was previewed by Steven Litt of The Plain Dealer and cleveland.com.