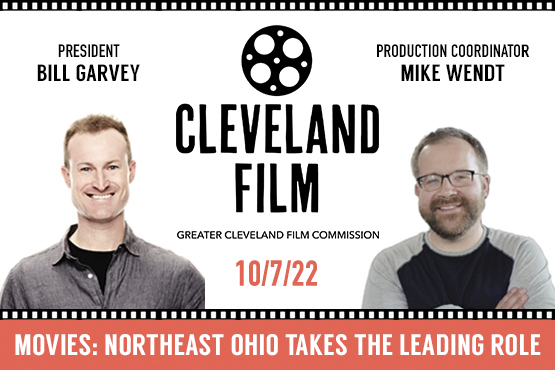 Why does Hollywood love to film in Northeast Ohio? Locations, locations, locations! From skyscrapers to small towns, beachfront to backwoods, Ohio has the unique ability to transform itself into almost any location filmmakers need it to be. Garvey and Wendt will take LOF attendees behind the scenes of some of Hollywood's favorite movie locations that are right in our backyard.

Mike Wendt is an award-winning director, producer and location manager/scout. He currently is the Production Coordinator for the GCFC. He has worked on films such as Captain America: Winter Soldier, Fate of the Furious, My Friend Dahmer and White Boy Rick. His first feature-length documentary, The End Of The World As We Knew It, was a selection of the 33rd Cleveland International Film Festival and his short film Goodbye, Ohio played numerous film festivals.

The Greater Cleveland Film Commission is the only 501(c)3 nonprofit dedicated to driving economic development and job creation by cultivating a robust film and television industry in Northeast Ohio. Since 2009, media projects in Ohio have generated over $1.2 billion in economic impact and created 6,192 full-time equivalent jobs. More than 70 percent of Ohio's film tax incentive spending occurs in Greater Cleveland, thanks to GCFC's work.

All visitors are required to follow CIA's masking protocols, which change based on the CDC's Community Level for Cuyahoga County. To view current masking requirements, visit cia.edu/covid.