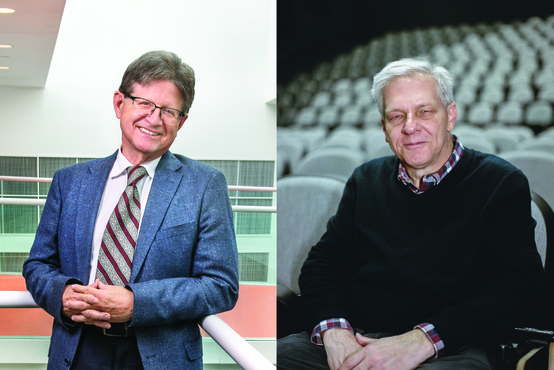 The Cleveland Institute of Art is delighted to invite you to our next Fireside Chat, a series of fun and insightful virtual conversations between some of the most interesting creative thinkers we know.

For our upcoming event, grab some popcorn and hear from CIA's resident cinema savants: CIA President + CEO Grafton Nunes and Cinematheque Director John Ewing. They will discuss their love for film and how the entertainment industry has changed over the years. They'll also touch on the history and significance of the Cleveland Institute of Art Cinematheque, which this year marks its 35th anniversary.

Grafton Nunes joined the Cleveland Institute of Art in 2010 as its 10th president. He presides over the College's 15 programs of study in art and design. In 2015, he completed a six-year, $75 million capital campaign and campus unification project that consolidated operations in the George Gund building—including the state-of-the-art Peter B. Lewis Theater, home to the Cinematheque.

Prior to CIA, Nunes was founding dean of the School of the Arts at Emerson College in Boston and built its graduate film program, currently ranked #9 in the U.S. Before that, he served for 22 years at Columbia University in New York City, concluding his tenure there as associate dean of the School of the Arts. Nunes is a graduate of Columbia with an MFA in film history, theory and criticism, and a Master of Philosophy in Theater History and Film Studies. During an active career as a film writer and producer, Nunes was producer of The Loveless (1981), directed by Oscar winner Kathryn Bigelow and featuring Willem Dafoe in his first starring role.