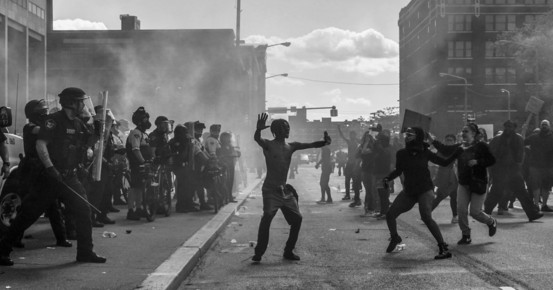 "Bridging the Divide" by AJ Almy

Join us for a virtual conversation between 2020 CIA alum AJ Almy and Photography + Video adjunct faculty member Deborah Pinter from noon to 1pm Friday, February 26. The two will discuss Almy's recent work, which included documenting the Black Lives Matter protest on May 30 in downtown Cleveland. His photos from that day, including "Bridging the Divide," received widespread media attention.

Please note: When you click on this link, Zoom will open a web browser and prompt you to download (or update) your software. You may want to do this a few minutes prior to start time, so that you're ready when the presentation begins.

Andrés "AJ" Almy was born in Colombia and adopted at the age of 8. America offered him hope, possibilities and a new way of life that allowed him to merge his identities and pursue his artistic dreams. Now, he is a creative cinematographer and photographer who loves to capture everything the world has to offer visually. AJ is passionate about traveling, meeting new people and cinematically recording his experiences. He thrived as a student at the Cleveland Institute of Art, where he majored in Photography + Video. CIA helped him liberate and express emotions, thoughts, interests and visions he couldn't convey in words and put them into a pictorial form to communicate with others. With his videos, he hopes to inspire others to open their eyes to see different perspectives, experience new things and appreciate humanity as well as the beauty in the world around.

Deborah Pinter received her BFA from the Cleveland Institute of Art, where she majored in Photography and minored in Drawing. She received her MA in Photography from the International Center of Photography/New York University and continued to take printmaking classes with one of her idols, Krishna Reddy. After graduation, she worked as a photographer’s assistant and studio manager in New York City. Moving back to Cleveland in 1993, she worked as an educator, teaching studio classes and giving tours at the Cleveland Museum of Art; she taught Photography in the Continuing Education department at CIA; and she worked as an artist-in-resident throughout Ohio. Eventually, she became a full-time educator at the Akron Art Museum in 2000. In 2016, after 11 years as executive director of a small community art center on the east side of Cleveland, she went back to focus on her art practice and selecting positions that are rewarding and inspirational.

Pinter has shown her work throughout Ohio and internationally in group exhibitions, including at the Cleveland Museum of Art, The Riffe Gallery in Columbus, and the Alte Feuerwache Loschwitz in Dresden, Germany. She's had solo exhibitions at Massillon Museum, the Cleveland Botanical Garden and University of Akron's Honor College. Pinter’s work can be found in numerous public and private collections including, The Progressive Art Collection, Cleveland Museum of Art, Cleveland Institute of Art and The Grafikwerkstatt Collection in Dresden, Germany.

Creativity Hour is a series of Cleveland Institute of Art alumni conversations that explore each graduate’s artistic practice, inspirations and professional experiences. The talks are organized by the Alumni Council and will also cover the speaker’s time as a CIA student and include their advice for young and aspiring artists. Previous Creativity Hour talks and other CIA virtual programming can be viewed at cia.edu/virtualvault.