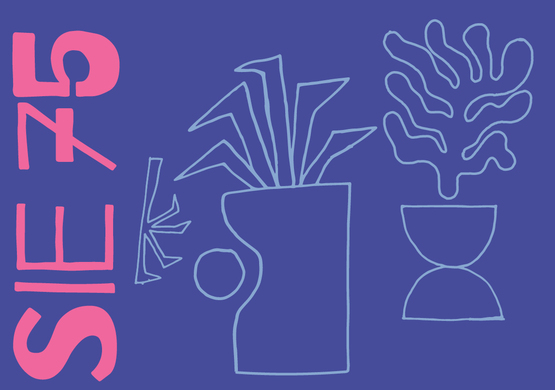 The show will be available for viewing online and in Reinberger Gallery from February 12 through March 12. Guests may see the show in person on Wednesdays and Fridays; email the gallery to schedule an appointment.

Join us for the SIE 75 virtual opening night event via Zoom! It will begin at 6:30pm with an SIE Committee-led walk-through of the exhibition via the show's website, and then at 7pm, awards will be announced. Award recipients are listed on the show's website and below:

BOARD OF DIRECTORS AWARDS

Board Honorable Mentions with Distinction

This year's SIE jurors were:

Alex Da Corte was born in Camden, N.J. in 1980. He received a Bachelor of Fine Arts from the University of the Arts, Philadelphia, and a Master of Fine Arts from the Yale University School of Art. Da Corte was most recently included in La Biennale di Venezia 2019, the international exhibition May You Live in Interesting Times curated by Ralph Rugoff; as well as the 57th Carnegie International in Pittsburgh. His most recent solo exhibition was held at Kölnischer Kunstverein, Köln, Germany (2018).

Luci Jockel is a jewelry artist based in Philadelphia. She currently holds the position of Jewelry and Metalsmithing Lecturer/Coordinator at Towson University. She received her Master of Fine Arts from Rhode Island School of Design in Jewelry and Metalsmithing in 2016 and a Bachelor of Fine Arts in Studio Art from Indiana University of Pennsylvania in 2014. Recently, she was honored with the 2019 American Craft Council Emerging Voices Award as a Shortlist Artist.

Sarah McKenzie is a painter based in Colorado. She holds a BA in film studies from Yale University and an MFA from the University of Michigan. Early in her career, from 2001 to 2006, she taught Foundation and Painting at CIA. Sarah’s paintings capture architecture in transition—structures and spaces that are fluid rather than fixed. Past series have focused on construction sites, abandoned buildings, hotel rooms and parking garages. Her current body of work takes on the adaptive and highly coded architecture of exhibition space—the white-walled interiors of museums and galleries.

Laila Milevski is an illustrator, comic artist and adjunct faculty at Maryland Institute College of Art. Milevski is interested in editorial, publishing and sequential illustration, and their personal work focuses on research-based nonfiction illustration. Before completing an MFA in Illustration Practice at MICA, Milevski worked at Candlewick Press in the design department and self-published mini-comics and zines. Subjects of interest have included WWII displaced persons, spirituality in architecture, Antonioni’s movies, and the Soviet experience.