Where Cleveland Institute of Art, Kohl Corridor, outside Reinberger Gallery 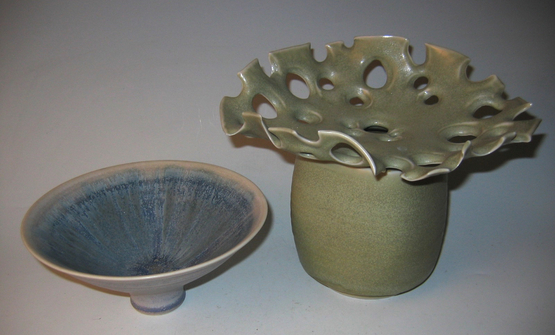 The potter endows a rather lifeless and formless and valueless material with forms, with his ideas, and with his values, while the material offers its attributes and its own peculiar beauty, and with the dialogue indicating that it might have paused at an apt moment or might have been carried yet further, but somehow was arrested while vital and alive, to be thus rather paradoxically frozen by fire.
—Charles Lakofsky,Pottery (1968)

Cleveland native Charles Lakofsky was an internationally renowned “functional ceramist” who enjoyed experimenting with sculptural forms. He worked in both porcelain and stoneware, formulating his own glazes and firing regimens. Lakofsky felt that his ceramic work “ultimately served some purpose, be that purpose mundane or aesthetic.” He believed one should avoid both fashion and ill-conceived innovations, so that “materials and forms and fire [can] remain of paramount interest.” His 1981 Designer-Craftsmen Achievement Award cited Lakofsky’s “major contribution to crafts in Ohio through creative and technical excellence, and the broadening of the field of knowledge and in professional accomplishments.”

This small sampling of his work consists primarily of Lakofsky studio work that remained in the family home when CIA Liberal Arts faculty member Mark Bassett worked with his widow on a 2008 memorial exhibition, “Charles Lakofsky: Ohio Modernist Master.” After Mrs. Lakofsky’s death a few years later, Mark purchased a number of works from the estate. He curated this exhibition and wrote the text.

From 1948 to 1983, Lakofsky taught art at Bowling Green State University, and frequently chaired the Art Department. After his marriage to a talented pianist and teacher of piano pedagogy at BGSU, Helen DeJager, their home became a refuge and a showcase for students and faculty who appreciated ceramic art and also music. For Helen, Charlie built both a harpsichord and a clavichord. He drew up the blueprints for the home, designed their Japanese-style tiered garden and other landscaping, and created the tile flooring. Over time, the Lakofskys became known for their ever-expanding collection of contemporary studio pottery.

In addition to ceramics, gardening was a special passion for Lakofsky, as it had also served for his beloved design professor at CIA, Kenneth Bates. Years later, in Lakofsky’s 1993 obituary for Ceramics Monthly, a former student recalled, “In the 1970s when I was a student, a particular passion [of Charlie’s] was making pots for specific blooms. It was sheer joy for Charlie to match clay and glaze texture to take best advantage of a single or a group of flowers.”

In a 1965 Ceramics Monthly profile by Roger D. Bonham, Lakofsky explained that he especially enjoyed studio porcelain “for the discipline it imposes.” At the time, he was relying on “only four basic glazes,” but as Bonham notes, “these have been used in endless variety—in firing, glaze thickness, and even in cooling periods. One of the end results of [Lakofsky’s] approach is to create pottery that makes ‘happy families of brothers and sisters,’ as he thinks of them.” The profile concludes by noting that, “above all else, Lakofsky expects a potter’s work to be a personal expression. ‘I don’t have any trouble identifying a Marguerite Wildenhain pot, for instance. And I hope that people don’t have any difficulty in singling out a Lakofsky pot,’ he says. ‘I don’t like the word “style” but I guess that’s what it is.’”

Prize-winner–numerous competitive exhibitions, both regional and national
Represented in numerous private and public collections, including The Cleveland Museum of Art

Mark Bassett is a Lecturer in the CIA Liberal Arts Department. He teaches first-year writing and inquiry, American craft history, and other courses. His catalog for the 2008 Charles Lakofsky exhibition is available for purchase from Lulu.