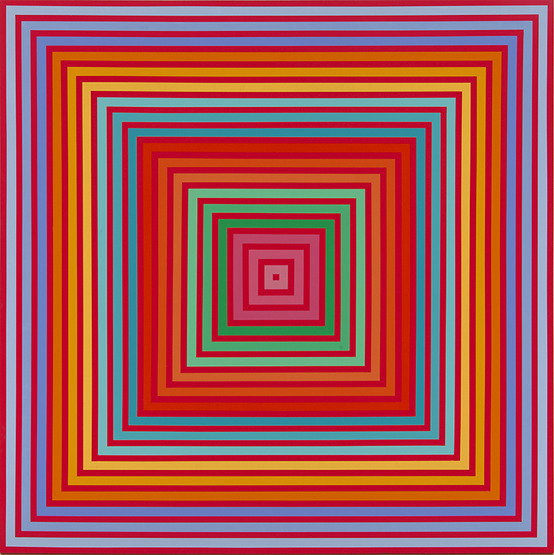 A 1953 CIA graduate, Anuszkiewicz vaulted to international prominence early in his career with the rise of the Op Art movement when his work was featured in The Responsive Eye, the landmark 1965 exhibition of perceptual abstraction at the Museum of Modern Art in New York.

In his elaborate early paintings, Anuszkiewicz explored the optical wizardry that occurs when high-intensity, complementary colors are applied to the same geometric configurations. New York Times art critic Holland Cotter wrote of Anuszkiewicz’s paintings in 2000, “The drama – and that feels like the right word – is in the subtle chemistry of complementary colors, which makes the geometry glow as if light were leaking out from behind it.”

Anuszkiewicz has work in the collections of more than 75 museums from Akron to Yale, countless private collections and was featured this summer in the international show, Dynamo - A Century of Light and Motion in Art, 1913 – 2013, at the Grand Palais Museum in Paris. The sampling of works in this fall’s CIA show – many of which appeared this past spring at the Loretta Howard Gallery in New York – was all completed in the last decade and reflects the painter’s evolution toward more subtle explorations of color and form.

This exhibition is generously supported by a grant from Dealer Tire. Additional support was provided by the Ben S. Stefanski family and the Polish-American Cultural Center.