Richard Linklater's "Before" trilogy coming to the Cinematheque 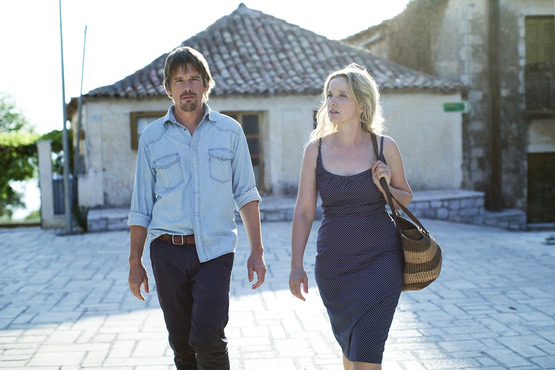 Moviegoers can watch screen lovers Jesse (Ethan Hawke) and Celine (Julie Delpy) fall in love, separate, reunite, and grow older—over a period of almost two decades—in the three films that comprise Richard Linklater’s acclaimed “Before” trilogy: Before Sunrise (1995), Before Sunset (2004), and Before Midnight (2013). All three love stories will be shown together, for the first time in Cleveland, between September 13 & 15 at the Cleveland Institute of Art Cinematheque, 11141 East Boulevard in University Circle, telephone 216.421.7450, www.cia.edu/cinematheque. All three movies will show back to back (with a short dinner break) on Sunday, September 15.

"I love these films, and I’m not alone,” said Cinematheque Director John Ewing. “Richard Linklater’s simple tale of a young American man who spends a night walking around Vienna with a French student he just met on the train has blossomed into a three-part chronicle about an intercontinental romance that has charmed and delighted millions."

All three movies will be shown from 35mm film in the Aitken Auditorium of the Cleveland Institute of Art. Admission to each movie is $9, Cinematheque members $7, age 25 & under $6. A second (or third) movie on the same day costs an additional $6 per film. There is free parking for filmgoers in the adjacent CIA lot, located off of East Boulevard. For further information, call John Ewing or Tim Harry at 216.421.7450 or email cinema@cia.edu.

Friday, September 13, at 7:30pm &
Sunday, September 15, at 3:00pm
BEFORE SUNRISE
USA/Austria/Switzerland, 1995, Richard Linklater
Young American tourist Jesse (Ethan Hawke) and French student Celine (Julie Delpy) meet on the train from Budapest and spend a day and a night talking and walking around Vienna—and falling in love. Jesse must catch a plane in the morning. Will they ever see each other again? Richard Linklater’s poetic, poignant romance remains one of the most touching films of the 1990s. 35mm. 101 min.

Friday, September 13, at 9:30pm &
Sunday, September 15, at 5:00pm
BEFORE SUNSET
USA, 2004, Richard Linklater
Nine years after their memorable night in Vienna, one-time lovers Jesse (Ethan Hawke) and Celine (Julie Delpy), now grown-up and gainfully employed, meet by chance in Paris and spend a few hours together before he needs to catch another plane. 35mm. 80 min.

Saturday, September 14, at 9:30pm &
Sunday, September 15, at 7:30pm
BEFORE MIDNIGHT
USA, 2013, Richard Linklater
2013's most acclaimed film picks up the story of Jesse (Ethan Hawke) and Celine (Julie Delpy) nine years after the events of Before Sunset, 18 years after they first met on that Vienna-bound train. Now in Greece, they are older and (maybe) wiser, but still possess the ability to transfix and entertain an audience by doing little more than walking and talking. "If the first two films belong with the greatest (if talkiest) movie romances of all time, the new film is richer, riskier, and more bleakly perceptive about what it takes for love to endure (or not) over the long haul." -Boston Globe. 35mm. 109 min. www.sonyclassics.com/beforemidnight/