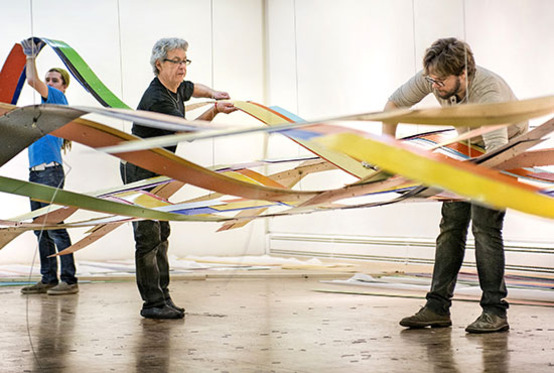 Swiss-born artist Beat Zoderer makes his United States solo show debut with a liberation of color and form. Improvisatory and idiosyncratic, Zoderer was on hand for a two-week residency at CIA from March 15-30, 2013, during which he:

Zoderer's installation will remain on view in Reinberger Galleries through May 4, 2013.

Zoderer is appreciated around the world by art enthusiasts who delight in his striking installations, sculptures, assemblages, and collages. Using everyday materials, he creates works that intrigue viewers and demand a double take.

Born in Zurich in 1955, he trained as an architectural draftsman before branching out as an independent artist. This may explain why his pieces, at first glance, often appear to be methodical structures based on mathematical systems. On closer inspection, each piece reveals a certain amount of whimsy. Zoderer often uses office or household items as raw material for his works, but he plays with perception, placing familiar items into wholly different contexts.

CIA's exceptional 2,000-square-foot Reinberger Galleries will be a perfect venue for a work that will display Zoderer's sophistication, a balance of wonder, and intellect.

In addition to New York, Zoderer has exhibited in London, Paris, Amsterdam, Istanbul, Sydney, and extensively throughout Switzerland, Germany, Austria, and Belgium.