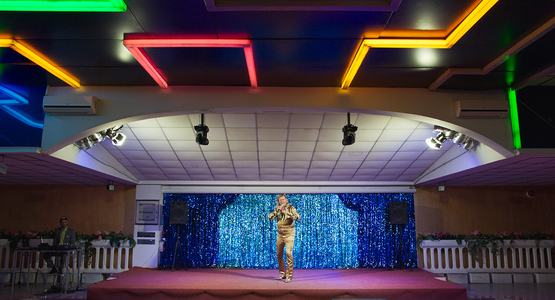 In the latest grotesque comedy by inveterate envelope-pusher Ulrich Seidl, an aging, washed-up pop star (a brilliant Michael Thomas) tries to recapture his past glory as a lounge singer in the wintry, off-season Italian seaside resort of Rimini, where he performs (sexually as well as on stage) for older tourists. The crooner’s hardscrabble life is complicated by a father with dementia and by the unexpected appearance of his long estranged grown daughter, who demands past unpaid child support. “An uncompromising, coldly provocative drama that gathered no prizes [at Berlin], which is a shame. But that its star, Michael Thomas, playing a washed-up club singer in an off-season Italian beach town, was not specifically recognized is more or less a crime.” –NY Times. No one under 18 admitted! Cleveland premiere. Subtitles. DCP. 115 min.