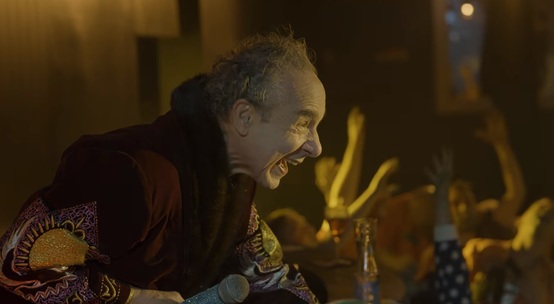 To the ranks of the screen’s most illustrious adaptors of Shakespeare—Laurence Olivier, Orson Welles, Kenneth Branagh—we can add Troma Entertainment’s Lloyd Kaufman, director of Tromeo and Juliet (1996) and now this new gross-out version of The Tempest. Kaufman also stars in the movie; his Prospero is a brilliant scientist whose cure for opioid addition is thwarted by evil pharmaceutical executives. So with the help of a large supply of whale laxative (not in the Bard’s original), he engineers a storm at sea that lands these Big Pharma baddies in Tromavillle, NJ. There justice awaits. “The ultimate Troma picture and the perfect coda to Lloyd Kaufman’s 50-plus years of truly independent filmmaking. Although he may play a twisted incarnation of The Tempest‘s deposed Prospero in the film, Kaufman remains more like cinema’s King Lear, madly howling at the storm of greed, hypocrisy, and good taste.” –Rue Morgue. Adults only! Cleveland theatrical premiere. DCP. 94 min.