UPHEAVAL: THE JOURNEY OF MENACHEM BEGIN 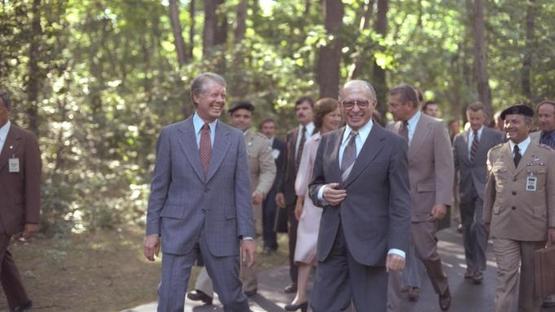 Imprisoned by the Soviets, orphaned by the Holocaust, elected Prime Minister, crowned peacemaker by the Nobel Prize Committee, and disgraced by the Lebanon War, Menachem Begin (1913-1992) was a pillar of the State of Israel and a fierce advocate for the Jewish people. This new documentary employs interviews and rare archival materials to profile Begin and explore his role in the history of modern Israel and its relations to its Middle East neighbors. “When I was asked to direct Upheaval, I immediately knew that the complexity of Israeli Prime Minister Menachem Begin’s story should be underscored by the need to strike a balance among vastly different political and ideological perspectives. As we see in society today, the gray is often erased in favor of more partisan and oversimplified stances, when, as I see it, there are untold nuances to leadership from which we can learn deeper truths and lessons. This film is a study in the gray.” –filmmaker Jonathan Gruber. Cleveland premiere. 87 min. The film will be followed by a pre-recorded panel discussion.

Upheaval: The Journey of Menachem Begin, a Cinematheque streaming exclusive, can be viewed online from 6/9 thru at least 7/1 via the link below. Doing so supports the Cinematheque. Screening fee is $12 and you have 30 days to watch it.

Wednesday 6/9
12am
Back to film schedule