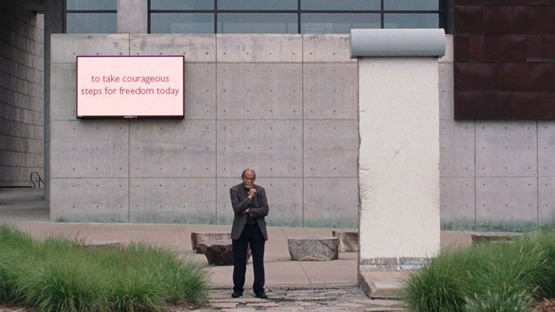 The new movie from Harvard’s Sensory Ethnography Lab (Sweetgrass, Leviathan) surveys some of the Americans who, for various reasons, own chunks of the Berlin Wall, the concrete barrier built in 1961 that separated Communist East Berlin (and East Germany) from “free” West Berlin during the Cold War—until it was torn down in 1989. The Wall resonates with these collectors and “curators” in different ways, and with key aspects of American history and culture. The filmmakers explore all that as they visit over 40 sites where these panels and monoliths have become public monuments. 100% critics rating on Rotten Tomatoes! “An elegant and potent visual essay.” –Hollywood Reporter. Cleveland premiere. 70 min.

The American Sector, a Cinematheque streaming exclusive, can be viewed online from 6/25 thru at least 7/15 via the link below (coming soon). Doing so supports the Cinematheque. Screening fee is $12 and you have five days to watch it.