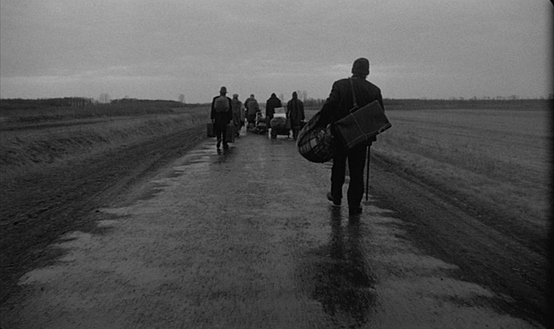 25 years after it debuted, Béla Tarr’s seven-hour Hungarian epic is finally being acknowledged as what we long thought it was: one of the great, essential movies. (In 2012, it was voted the 36th best movie of all time in an international poll of film professionals conducted by Sight & Sound magazine.) But because Sátántangó was never widely distributed in the U.S., opportunities to see it have been rare. That’s why this 25th anniversary restoration and re-release is a major event. Set in a squalid, desolate rural village in late 20th-century Hungary (after the fall of Communism), this bleakly beautiful film focuses on a group of desperate, destitute, hard-drinking members of a defunct agricultural collective who dream of prosperity and escape from their drab, dead-end lives. So when deliverance comes in the form of a young (but suspect) messiah who promises to lead them to a better place, they pack up and follow him. Sátántangó (the title translates as Satan’s Tango, and the film’s 12 chapters mirror the structure of the tango—six steps forward, six steps back) is at once a monumental black comedy; a metaphysical allegory; a menacing mystery with an interlocking jigsaw structure; and a technical tour-de-force with virtuoso long takes, indelible sound effects, and an unshakeable mood of foreboding. It is not to be missed. “One of the great, largely unseeable movies.” –J. Hoberman. “Enthralling for every minute of its seven hours.” –Susan Sontag. “My favorite film of the 90s.” –Jonathan Rosenbaum. Subtitles. DCP. Total 438 min. Part 3 177 min.

Sátántángó will be shown in three parts. It can be seen all in one day or over two or three days. A pass admitting one person to one showing of each part (on any day) costs $20; members, CIA & CSU I.D. holders, those age 25 & under $15. Tickets to individual parts cost $10; members, CIA & CSU I.D. holders, and those age 25 & under $7. No passes, twofers, or radio winners.