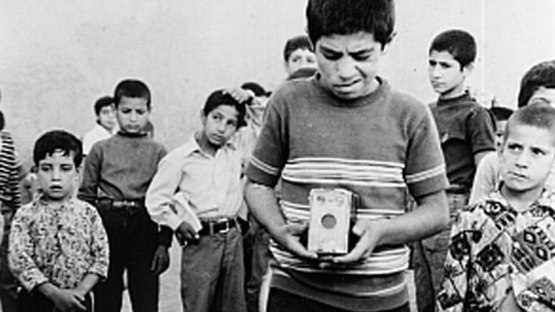 Abbas Kiarostami’s second feature boasts the hallmarks of his later masterpieces: non-professional actors, a strong sense of place, and a central journey and quest. When a young boy who is a big soccer fan learns that his favorite team will be playing in Tehran, 150 miles from his village, he turns petty thief and swindler to get the required bus fare. “As wonderful as the later Kiarostami films.” –Time Out Film Guide. Preceded at showtime by Kiarostami’s first two movies, both shorts: Bread and Alley (Nan va Koutcheh, 1970), in which a boy bringing home bread for his family encounters a scary dog in a lonely alley, and Breaktime (Zang-e Tafrih, aka Recess, 1972), in which a schoolboy sent home for breaking a window with a soccer ball joins another game of football along the way. Cleveland revival premiere. DCP. Total 102 min.