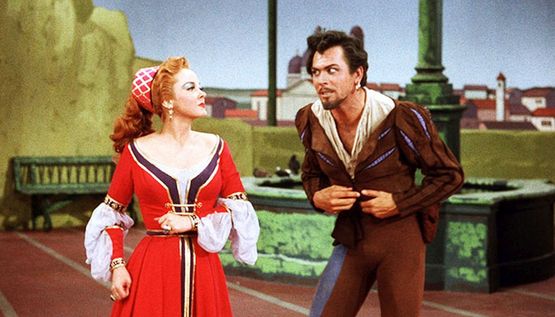 Two once-married actors who now hate each other (Kathryn Grayson, Howard Keel) find themselves co-starring in a stage musical based on Shakespeare’s The Taming of the Shrew. Their mutual animosity threatens to sink the show, until some gangsters who have a financial stake in the production step in. This clever, hilarious musical farce contains some of Cole Porter’s best songs, including “So in Love,” “Too Darn Hot,” “Wunderbar,” “I Hate Men,” and “Brush Up Your Shakespeare.” Co-presented by The Musical Theater Project; TMTP Founding Director Bill Rudman will introduce the film at 3:00 and lead a post-film discussion. Blu-ray (2D). 109 min.

Sunday 1/13
3pm
Back to film schedule