Cinematheque . Film Schedule . THE OTHER SIDE OF THE WIND

THE OTHER SIDE OF THE WIND 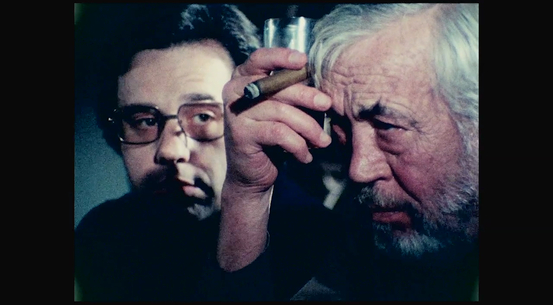 The film event of the century! Begun almost 50 years ago and shot off and on over a period of seven years, the final feature by Orson Welles languished unedited, inaccessible, for four decades. In 2016, Netflix stepped in to bankroll the completion of the film by an all-star team that included producer Frank Marshall and director Peter Bogdanovich, one of the movie’s stars. On August 31, 2018, the day that many thought would never come actually came: The Other Side of the Wind had its world premiere at the Venice Film Festival. Now the rest of the world can experience the final work by arguably the greatest filmmaker of all time. (Thanks to Netflix, Cleveland moviegoers can see it on the big screen projected from 35mm film!) John Huston, Oja Kodar, and Bogdanovich star in Welles’ opus, a “mockumentary” that captures the 70th birthday party for rugged, larger-than-life “old Hollywood” veteran director Jake Hannaford (Huston) while incorporating scenes from Hannaford’s “comeback” film—an arty, psychedelic, vapid youth movie (à la Antonioni’s Zabriskie Point) typical of “new Hollywood.” Through it all, Welles thumbs his nose at the macho men and industry gadflies that ostracized him for decades—while crafting a dazzling, no-budget kaleidoscope that showcases his own awesome, often unrecognized talents. “As a mad satire of movie-world tumult, and a furious love letter to the business that made and unmade its maker, it could scarcely be improved.” –The Telegraph. Cleveland theatrical premiere. 122 min.