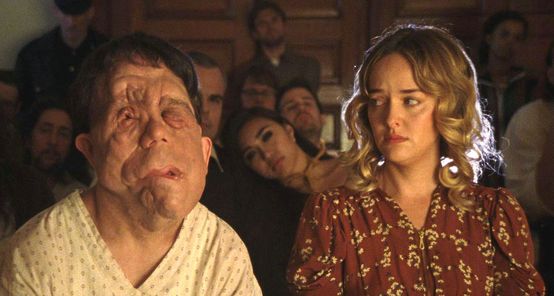 Before he became a lawyer and law professor at CWRU, Charlie Korsmo abandoned a promising Hollywood movie career; he was the kid lead in such high-profile 1990s films as Hook, What About Bob?, and Dick Tracy. Korsmo returns to the big screen for the first time in 20 years in this adventurous new indie film from Brooklyn’s Aaron Schimberg (Go Down Death) that was one of the highlights at this past summer’s BAMcinemaFest. (Korsmo plays a character named “Herr Director” who seems to be an amalgam of R.W. Fassbinder and Werner Herzog.) Chained for Life (also the title of a 1952 cheapie about conjoined twins) is a movie-savvy meditation on beauty, physical deformities and disabilities, and their appropriation/representation on screen. It chronicles the shooting of a low-budget horror/exploitation film about surgical experiments in a creepy hospital. The cast includes a blonde beauty (Jess Weixler) and an assortment of “freaks” led by disfigured Brit actor Adam Pearson of Under the Skin. Schimberg’s provocative film turns dreamlike and meta as the movie within the movie begins to blend with scenes of the actors and crew on the set. Schimberg and Korsmo will answer audience questions after the screening. “A truly mesmerizing mind trip of a movie sure to leave audiences reeling and pondering its mysteries long after the credits roll.” –IndieWire. “Bizarre and beautiful.” –Hollywood Reporter. Cleveland premiere. DCP. 91 min.