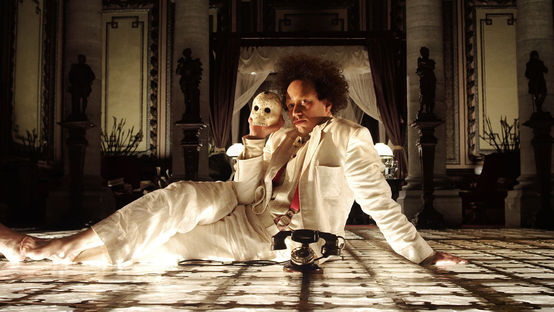 The most acclaimed film in a number of years by the iconoclastic and provocative British director of The Cook, the Thief, His Wife and Her Lover details the sexual awakening of the great Soviet film director Sergei Eisenstein, a homosexual and one of Greenaway’s idols. Greenaway imagines that this happened while the Battleship Potemkin director was in Mexico during the early 1930s, shooting miles of footage for his never-finished south-of-the-border epic ¡Que Viva México! Greenaway’s visually staggering film uses split screens, projections, sumptuous sets, A.D.D. editing, excessive verbiage, and his usual high quotient of sex and nudity to chronicle Eisenstein’s transformation. “An outrageously unconventional and deliriously profane biopic that could take decades to be duly appreciated.” -Variety. No one under 18 admitted! Cleveland premiere. DCP. 106 min.