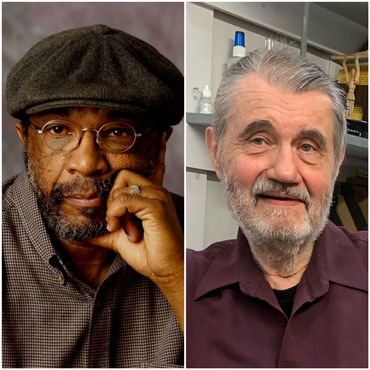 It's with a heavy heart that I share news of the recent passings of two esteemed members of our CIA family: Moe Brooker, a dedicated and influential faculty member from 1976 to 1985, and Fred Gutzeit, a 1962 alum whose work progressed from closely observed variations of light on common objects, such as fences, to wildly colorful abstractions derived from figural elements, like letters, numbers and geometric shapes.

Moe's time at CIA was historic. He was the College's first Black faculty member who taught for the BFA program. “I felt a real sense of obligation,” he told the Plain Dealer about that distinction. “If I failed, I'd be failing so many people.” His influence was felt far and wide at CIA. Many former students will attest to his importance to their development as artists. His impact on them was profound, both for his technical excellence and his inspirational values. His passing leaves a hole in the lives of so many who studied at CIA.

Moe’s stature as an artist was equally impressive and significant. His exuberant, brilliantly colored abstract paintings are found in the collections of the African American Museum in Philadelphia; The American Museum of the Pennsylvania Academy of the Fine Arts in Philadelphia; Philadelphia Museum of Art; the Cleveland Museum of Art; and Studio Museum in Harlem in New York City, among others. He earned the Cleveland Arts Prize in 1985, and later would be recognized by receiving the James Van Der Zee Lifetime Achievement Award from the Brandywine Workshop in Philadelphia and the Artist of the Year Award from former Pennsylvania Gov. Edward G. Rendell.

Fred was born in Cleveland and attended West Technical High School, where he excelled in his art classes. At CIA, he majored in Painting and earned awards such as the Otto F. Egge Award for Scholastic Excellence; the Jack Johnson Memorial Award; and the Mary C. Page Traveling Scholarship. He used the latter to live and work in Mexico for 10 months rather than pursue an MFA at Yale University in New Haven, Conn. In 1963, he moved to New York City and established his practice in the Bowery in Lower Manhattan.

We at CIA extend our deepest sympathies to Moe’s and Fred's families and to all who studied under or alongside them at CIA.